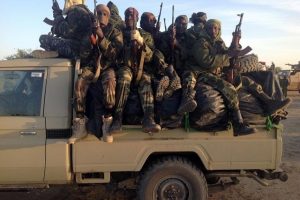 At least five civilians were killed and several others wounded in an attack by Islamist Boko Haram militants in southeast Niger, near the border with Nigeria, according to local sources.

“The BH (Boko Haram) came to the market place early Friday evening, they shot the crowd and took food,” said a resident of Toummour, in the southwest Diffa region, which was targeted by the attack.

A local official on Sunday confirmed the toll of “five dead, all civilians”, adding that several were also wounded in the attack.

Diffa governor Mahamadou Laoualy Dan went to Toummour on Saturday to “offer his condolences” to relatives of the dead and “encourage” the army who “routed” the attackers, Niger television reported.

“We ask the people to hold on… 2018 will be a decisive year in the war against Boko Haram,” he said in front of Toummour residents.

In January, seven Niger soldiers were killed and 17 wounded in an attack in Toummour, which is located in the east of Diffa close to the Lake Chad basin, a strategic area where the borders of four countries converge.

Diffa has suffered several Boko Haram attacks since the insurgency spilled over from Nigeria in 2015.

On June 3, 2016, the militants killed 26 soldiers and left an unknown number of civilian casualties in a massive attack in the town of Bosso, about 20 kilometres (12 miles) from Toummour.