You are here: Home / Mediterranean / NGOs: Terrorism in Egypt down 50% during 1st half of July 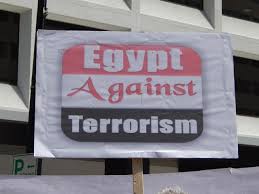 A coalition of NGOs tracking the rate of violence in Egypt has said that the rate of terrorist incidents halved in the first two weeks of July.
A report by the Parliamentary Election Observator, an alliance of 35 local and international human rights groups, said terrorist crimes dropped by 50 percent during the period between July 3-16, compared to the last week of June.
“The reports issued by the Mission revealed that terrorist crime rates decreased remarkably during the two weeks following the anniversary of the June 30th revolution, which witnessed a qualitative development in the nature of terrorist crimes. These crimes dropped in the second week of July 2015, which was attributed, in the reports issued by the Mission, to the relative success of the security measures taken by the Egyptian government,” the report said.
According to what has been monitored by the reports, the number of terrorist crimes decreased to 83 crimes during the period between July 3 and 9, 2015. Additionally, there were 63 crimes during the period from July 10 to 16, 2015, compared with 111 terrorist attacks in the week concurrent with the anniversary of June 30, it added.
The reports also revealed that the largest concentration of terrorist crimes occurred in the North Sinai governorate, where the targets were mostly men in the armed forces and police. In addition, attacks continued on vital facilities, as well as on headquarters of diplomatic missions.