You are here: Home / Mediterranean / Next stop for Islamic State? Algeria 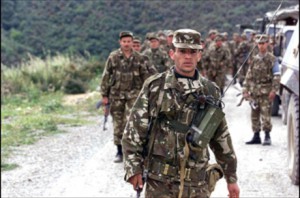 Islamic State (ISIS) has conquered large parts of Syria and Iraq and set up ‘branches’ as far away as Libya and the Sinai Desert – but now, it has set its sights on Algeria.

Months after successfully conquering the Libyan coastal city of Sirte, Algerian authorities say that ISIS has attempted to expand westward to conquer the largely-desert border region between the two countries.

On Thursday, the Algerian army raised its alert level to the highest level and has drafted some 50,000 troops to ward off ISIS ahead of an anticipated invasion; authorities cited the Libyan army’s inability to defend its Western borders and Sirte’s downfall.

An anonymous source told Turkey’s Andalou News agency that “the Algerian army received strict orders to shoot immediately in the event of any attempt to infiltrate into the Algerian territory.”

Algeria and Libya share a border of over 1,000 km (621 miles) of desert that has been a prime target for Al Qaeda affiliates since the fall of Libyan dictator Muammar Ghaddafi in 2011.