You are here: Home / MidEastGulf / New Zealand: more troops will be sent to Iraq 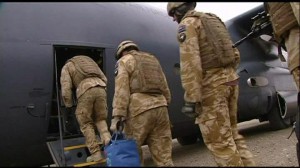 NZ First’s Ron Mark believes more troops are being trained for deployment to Iraq, but the government says it doesn’t know what he’s talking about.

“We understand preparations are being made to deploy an extra platoon of infantry, about 30 personnel, to assist with security at Taji,” Mr Mark told reporters on Tuesday.

About 150 Defence Force personnel are based at Taji camp near Baghdad, helping train Iraqi forces to fight the Islamic State.

“I have no knowledge of that at all,” Mr Key said.

“We made a commitment that we would have around about 150 people, or slightly fewer than that, in Iraq.

“As I understand it, that number is going to he consistently maintained.”

Defence Minister Gerry Brownlee told reporters the government wasn’t considering sending any extra troops to Iraq, and he didn’t know why Mr Mark thought it was.

“I don’t know where anything that comes out of Ron Mark’s mouth comes from,” he said.

Mr Mark, a former army officer, says he has confidence in his sources.