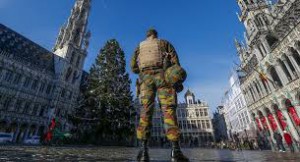 Authorities in cities around the world this week upped officer patrols and arrested suspects connected to alleged terror threats made on several major New Year’s Eve celebrations. Police in countries like Turkey, Belgium and England were taking action to protect partiers amid heightened global concern about national security in light of recent attacks in Paris linked to the Islamic State group.

Turkish police detained two suspected suicide bombers Wednesday who they said were planning to target New Year’s Eve events in the capital of Ankara, which has a population of about 4.6 million. Citing an anonymous official, Agence France Presse reported the duo was linked to ISIS.

The two men, identified only as M.C. and A.Y., had staked out a street lined by bars and an area outside a mall as possible locations to strike. But “they were caught before they had the opportunity to take action,” the prosecutor’s office told the Associated Press.

The Ankara arrests came a day after authorities in Belgium announced they had taken into custody two people intending to carry out attacks “in the same style as the Paris attacks” that killed about 130 people Nov. 13, the Brussels Times reported. The suspects reportedly planned to target soldiers and police officers in uniform around New Year’s Eve. Though a raid revealed no explosives at the suspects’ homes, police told the New York Times they did find ISIS propaganda.

Meanwhile in London, Scotland Yard revealed plans to increase the visibility and presence of its police Thursday. More than 6,000 officers will be stationed in the city and its outer boroughs, where more than 100,000 people are expected to watch fireworks, the Guardian reported. In addition, about 700 British Transport police will extend their hours to monitor train stops through the night.

The international action followed a statement from police in Vienna earlier this week that European cities were at risk over the holidays, according to NBC News. “A warning was sent out by a friendly [intelligence] service to numerous European capitals, saying that it could come to an attack involving explosives or a shooting between Christmas and the New Year in crowded spaces,” the release said. But the worry could be unnecessary.

“Several possible names of potential attackers were mentioned, which were checked, and the investigation based on [these checks] has so far yielded no concrete results,” it added.