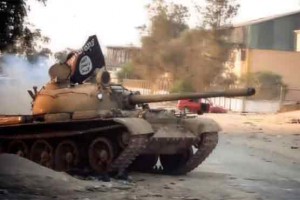 The United States and allied nations are making plans for military support to Libya once a new government is established, officials say, as Western countries seek to halt the growth of the Islamic State’s satellite there and contain worsening instability on Europe’s doorstep.

Defense officials from the United States, Britain, France, Italy and other nations met in Rome this week to advance proposals that, if approved, would help secure a new government, stand up a credible national army, and lay the groundwork for an eventual Libyan assault on the Islamic State.

While officials caution that no decisions will be made until a proposed unity government is in place and requests outside assistance, the steps being discussed would resume largely unsuccessful Western attempts to build security that followed Libya’s 2011 revolution. This time, the effort takes on greater urgency as an expanding Islamic State presence increasingly makes Libya an alternate destination for aspiring jihadists.

“We want to help make sure the government succeeds, so we’re going to try to be as nimble as we can,” said a senior U.S. official who, like others, spoke on condition of anonymity to describe planning discussions. “There is a lot of preparation, but there are limits to what can be done without additional dialogue with the new leaders.”

Options being discussed include sending Italian and other European forces to Libya to help stand up a local stabilization force and reviving a Pentagon program to train Libyan counter-terrorism troops.

But Libya, now a far more fractured, dangerous place than it was following former dictator Moammar Gaddafi’s ouster in 2011, presents the Obama administration and its allies with a dilemma.

While officials are eager to prevent a failed state from incubating militant threats on Europe’s southern flank, Western militaries are already stretched by operations in Iraq, Syria, Afghanistan and elsewhere. Western countries see the establishment of a respected military force as key to Libya’s stability, but there are no nationally recognized institutions they can work with.

And, in a country made radioactive by the 2012 Benghazi attacks, the appetite for risking Western lives is low.

At the same time, officials acknowledge that a United Nations-led effort to secure support for the fledgling unity government may not succeed — and that any new Libyan administration might not survive the deep divisions that have paralyzed the country in recent years.

“The task today will be much more difficult than it would have been a year ago,” said Karim Mezran, a senior fellow at the Atlantic Council, a Washington think tank. “For the new government to be located in Tripoli, it will be absolutely necessary for Western governments to help provide security. This will certainly involve training for Libyan forces, but it will also require European and other nations troops on the ground.”

Once seen as an Arab Spring success, Libya has been consumed by chaos since mid-2014 as two rival governments have competed for legitimacy and resources. The rift has hastened an economic decline, provided a foothold for an array of extremist groups and allowed Libya to become a deadly waystation for migrants seeking access to Europe.

Western officials are hoping that Libyans, their oil-rich country isolated and going broke, will set aside their differences, if only out of fear of the Islamic State. The group’s Libya operation, while smaller and less experienced than the parent group that now controls much of Iraq and Syria, has already laid claim to the coastal city of Sirte, using the same brand of severity.

In recent weeks, the militants have shown new potency beyond their Libyan base, launching sustained assaults on oil facilities and killing at least 47 people at a police training center in what Western officials fear is a campaign to further undermine Libya’s economy and security.

American officials say they have indications that Islamic State leaders are now instructing foreign recruits to defer plans to travel to Iraq and Syria, where U.S. and allied military actions have made their operations more difficult, and travel instead to Libya.

“They are looking for a place that has less risk for them,” one senior U.S. military official said.

While Western officials believe the Islamic State threat in Libya is for now internal, they fear that may change given the country’s proximity to Europe.

The United States has already taken unilateral action against the Islamic State in Libya. In November, the Pentagon announced an airstrike targeting Abu Nabil al-Anbari, whom officials had identified as the group’s leader there.

But Western nations, wary of upsetting fragile peace talks, have held off on more sustained action against the group and insist that Libyans must take the lead in fighting the Islamic State.

“We have before us a real opportunity to stabilize the country, which must be grasped by everyone,” Gentiloni said.

Officials said they do not plan to resurrect a failed 2013-14 training plan, which sought to build a force by pulling Libyans out of the country for training. That effort was marred by a host of problems including a spree of sexual assaults by Libyan recruits in Britain.

They do hope to launch efforts to build up a national military force that is stronger than a host of militias and expect to conduct training efforts in Libya, which will require substantial force protection measures and could put foreign troops at risk.

American officials say they are considering the resumption of training for Libyan counterterrorism forces. In 2013, the U.S. military halted a special operations training program after gunmen looted a training base and made off with U.S. equipment.

A senior U.S. defense official said additional American support could include embedding advisers at senior levels of security ministries and providing support to law enforcement agencies. The focus, they say, will be to help Libyans negotiate what are expected to be fraught interactions between civilian and military authorities.

Foreign officials will also seek to help Libya improve controls of its porous borders along with providing other, non-military assistance.

Western nations attempted such assistance in the more hopeful period after 2011. Time and again, those programs floundered in the face of local power struggles and scant government know-how.

In parallel with plans to support the new government, U.S. officials are also considering intensifying their own actions against the Islamic State.

The recent surge in Islamic State activity “is informing some of our decision-making … and it is helping us sort of craft potential options for the way forward,” a senior U.S. military official said.

One problem they face is a limited understanding of dynamics on the ground. Libya has long been a relative black hole for intelligence agencies, making for a shortage of reliable militant targets.

In December, a Special Operations team was photographed during a brief visit to western Libya, part of an effort to identify armed groups that might act as U.S. partners in the future.