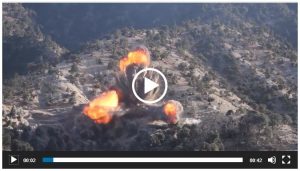 A new video released by the US military in Afghanistan shows massive airstrike on a compound of the ISIS terrorist group in eastern Nangarhar province of Afghanistan, like reported by khaama.com.

The latest airstrikes were reportedly carried out last week in the vicinity of the restive Achin district amid ongoing air campaign against the terror groups.

There are no reports regarding the casualties inflicted on ISIS terrorists in the particular raid but the US military says “An airstrike destroys an ISIS-K fighting position during Afghan Commando offensive operations in Mohmand Valley, Nangarhar province. Over the winter, Commandos pushed ISIS-K seven kilometers from Afghan civilian centers positions in Mohmand Valley.”

This comes as the Afghan and US forces have launched a series of new airstrikes against the terror groups across the country during the recent weeks.

Over the past 96 hours, U.S. forces conducted air operations to strike Taliban training facilities in Badakhshan province, preventing the planning and rehearsal of terrorist acts near the border with China and Tajikistan by such organizations as the East Turkistan Islamic Movement and others, according to a report by NATO-led Resolute Support Mission.

The strikes also destroyed stolen Afghan National Army vehicles that were in the process of being converted to vehicle-borne improvised explosive devices.

The report further adds that during these strikes, a U.S. Air Force B-52 Stratofortress dropped 24 precision guided munitions on Taliban fighting positions, setting a record of the most guided munitions ever dropped from a B-52. The aircraft has played a leading role in Air Force operations for decades, and was recently reconfigured with a conventional rotary launcher to increase its reach and lethality.