You are here: Home / MidEastGulf / New US military team to focus on recapturing Ramadi 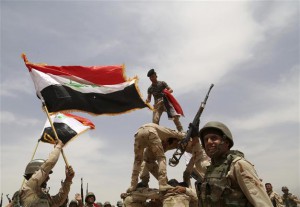 President Barack Obama is sending 450 additional US troops to help Iraqi forces seize back control of the western city of Ramadi from the Islamic State of Iraq and the Levant (ISIL) jihadists.

Of the 450 troops heading to Anbar province within six to eight weeks, less than 100 will be advisers who will assist Iraqi commanders for an eventual counter-attack in Ramadi, officials said. The remainder of the contingent will handle logistics and provide security for fellow troops.

The American advisers will be working with various Iraqi units including the army’s 8th Division, elements of which retreated in defeat when Ramadi fell to the ISIL group last month.

The troops will “assist with planning, integration and support of Iraqi Security Forces and tribal forces as they fight to retake the Ramadi and Fallujah corridor,” the Pentagon said in a statement.

The new advisory team will deploy to Taqaddum air base, which is located only 22 miles (37 kilometers) from Ramadi.

Until now, US troops in Anbar province have operated from al-Asad air base, where several hundred US Marines are stationed. Inserting the American advisers so close to Ramadi will help speed up the pace of coalition air strikes against the ISIL group, senior officials told reporters.

Apart from the battle for Ramadi, the advisers will be working to forge links with Sunni tribesmen in the area to encourage them to join the fight against the ISIL group.

“What we’re trying to do is bring the Sunnis into the fold and defeat” the ISIL group, Pentagon spokesman Colonel Steven Warren said.

But Iraq’s Sunni community remains wary of the Shiite-led government in Baghdad, as well as the United States. After having recruited Sunni fighters to fight the ISIL group’s precursor, Al-Qaeda’s branch in Iraq, the Americans withdrew from Iraq and left the Sunnis at the mercy of Shiite sectarian rule.

The ISIL jihadists have exploited the Sunnis’ sense of alienation and their battlefield victories have prompted the mobilization of large numbers of Iranian-backed militias, further fueling Sunni fears of persecution.

There were no immediate plans for US soldiers to train Sunni fighters or to directly arm a planned Sunni national guard, officials said.

There are already about 3,100 US troops in Iraq, including more than 200 advisers divided up into 12 teams and roughly 450 trainers deployed at four sites. About 800 of the troops are focused on safeguarding the US embassy in Baghdad and fellow soldiers.

At joint operation centers with Iraqi officers, there are US specialists helping plan and coordinate air strikes and a team in northern Iraq overseeing a fleet of drones. The American military presence includes a search-and-rescue team with aircraft ready in case a coalition pilot is shot down.

In keeping with President Barack Obama’s vow to avoid another ground war in Iraq, none of the US troops in Iraq are engaged in combat or accompanying Iraqi units on the frontline.

Critics of Obama’s strategy have urged a larger-scale air campaign and the deployment of thousands of additional special forces troops that could assist local forces and direct air raids.

As of June 9, the US-led coalition had carried out 4,468 bombing raids in Iraq and Syria since August. Of those strikes, 2,745 were conducted in Iraq.