You are here: Home / Europe / New security measures in french schools may be going too far

Since the Nov. 13 terror attacks in Paris, reams of new government safety measures and orders have been issued to schools, where teachers say the atmosphere is tense and their responsibilities overwhelming. 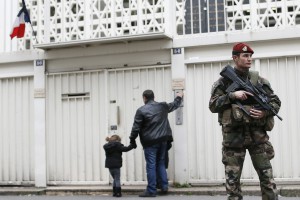 Since the Nov. 13 terror attacks in Paris, French schools have changed. Before entering, everyone’s identity and bags are systematically checked. Students and parents can no longer linger, or park, outside the main entrances. Before the Christmas holidays, all pupils had to take part in two security exercises: a fire drill and a “lockdown” scenario.

All these measures are part of a stream of orders given since the November attacks. A new memorandum, released on Dec. 17, completed the arsenal of preparations. Written by the ministries of national education and of the interior, it has planned, among other things, first aid “awareness” courses for teachers, pupils and their families starting in February.

Boards of education will be required to establish “crisis management units” and must take an inventory of the cellphone numbers of the school principals in order to be able to warn them in real-time during crisis situations.

In the weeks to come, there will be new measures to protect “particularly vulnerable areas” at schools. In Paris, authorities may soon develop “assault warning buttons,” video-protection installations, double-door entrances or protective windows.

The increased measures follow an ISIS death threat to teachers in the terrorist organization’s online magazine at the end of November, and explicit requests from parents groups for added security.

Still, there are doubts within schools about whether all this is feasible. “Since the attacks, authorities have been putting pressure on us,” says the head teacher of a school in the 11th arrondissement of Paris. “It’s hard to live with at school because it creates a tense atmosphere. We’re always on the lookout for new alerts.”

Sébastien Shir, secretary general of the main teachers’ union for grammar schools, says that the feeling is widespread. “Schools have received ministerial memos, departmental memos, administrative memos, each one taking the measures up a notch, as if everyone wanted to protect themselves (from criticism),” he says. The union estimates that the head teacher of a school in the Hauts-de-Seine department, near Paris, has received 150 pages of instructions since the attacks.

In some departments, the ministerial order to carry out “random” checks on bags at school entrances has evolved into an obligation to check all bags. In others, even parents of kindergarteners are no longer allowed to walk with their children into the school, instead required to drop them off outside the entrance.

“The difficulty is reconciling security and school culture, which is supposed to be a welcoming and open place,” Shir says. “Principals and teachers aren’t security agents. Everything cannot rest on their shoulders.”

In some places, parents have complained about the security exercises police have ordered. In Yohan’s Paris school (his name has been changed), where he is in the first grade, the exercise lasted 15 minutes. In the classroom, with the lights off and complete silence, the pupils stayed down on the floor under their desks. “With a teacher telling them, ‘If ever terrorists enter the school… ‘” the mother of the young boy says. She was troubled when her son came home and told her that he was “scared they’ll kick the door in and kill us.”

The outraged mother says, “I’m stunned by the complete lack of perspective from the teacher.”

This type of exercise isn’t new and was originally meant to protect students from various potential events: storms, floods or industrial accidents. But since Nov. 13, the “attack or exterior intrusion” risk has been added to the list. Many head teachers make sure they adapt what they tell students to the age of the children.

One head teacher didn’t want to include the children in the exercise. “I only held a meeting with the teachers and reminded everybody of their duties,” she says. “The pupils are already affected by what happened, and I preferred not overdoing it.”

Philippe Tournier, the secretary general of SNPDEN, a principals’ union, says no measure will enable schools to cope with such extreme situations. “Except surrounding schools with fortifications and sandbags.”