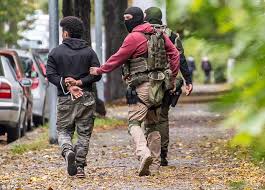 German police in the eastern city of Chemnitz have used stun grenades to enter a flat as they search for a man allegedly planning a bomb attack.

A man said to be linked to the suspect, Jaber al-Bakr, was detained. The 22-year-old Syria-born remains on the run.

Three other alleged associates were arrested on Saturday.

A raid on an apartment on Saturday uncovered several hundred grams of “highly volatile” explosives, later destroyed in a controlled explosion.

They have not provided any information about how long he had been in Germany.

They have urged anyone with information about him to come forward.

German Chancellor Angela Merkel’s popularity has waned since her decision to open the borders to refugees and migrants last year, admitting more than a million people, many of them Syrian.

In July, an axe attack on a train near Wuerzburg and a suicide bombing in Ansbach wounded 20 people and were claimed by so-called Islamic State (IS).