Plea comes after minister Rory Stewart said ISIL fighters should be killed off on battlefields of Iraq and Syria rather than being allowed to return home, like reported by thenational.ae 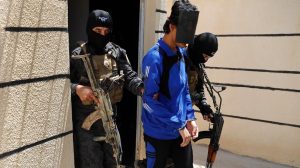 Britain’s top terrorism prosecutor called for new powers to cope with the threat of ISIL fighters returning from Syria, fuelling a debate over the issue ignited by a minister’s remarks that they should be killed on the battlefield.

Sue Hemming, head of counter-terrorism at the Crown Prosecution Service, said she had already doubled the size of the team of lawyers concentrating on Syrian threats but said new laws were needed.

“We must recognise that specific counter-terrorism powers are necessary and acting early to safeguard public safety means that traditional investigative powers are not sufficient.”

A new report from the security consultancy Soufan Centre said 425 Britons had already returned to the country, the fourth largest repatriation anywhere, after fighting with ISIL.

British government was locked in a dispute on Wednesday with Max Hill QC, the independent reviewer of British terrorism laws, who has condemned proposed legislation and instead advocates rehabilitation of returnees. He said the government was backing “knee-jerk, something-must-be-done” legislation to extend sentences for foreign fighters up to 15 years.

A government spokesman said it would bring in the new law to send a clear message to those recruited into terror ranks that they would be sent to prison.

The row came on the heels of controversial comments from Rory Stewart, an international development minister, who said ISIL recruits were members of a “death cult” that should be finished off overseas. Fuelling the controversy is that one of the pillars of British foreign policy has been opposition to the death penalty.

Mr Stewart, a former diplomat and author, acknowledged the returnees posed “very difficult moral issues” but ultimately their switch in loyalties should guide government actions. “These are people who have essentially moved away from any kind of allegiance towards the British Government. “They are absolutely dedicated, as members of the Islamic State, towards the creation of a caliphate, they believe in an extremely hateful doctrine which involves killing themselves, killing others and trying to use violence and brutality to create an eighth century, or seventh century, state.

“So I’m afraid we have to be serious about the fact these people are a serious danger to us, and unfortunately the only way of dealing with them will be, in almost every case, to kill them.”

The remarks drew praise from commentators, including the Daily Mail’s Richard Littlejohn, who called for Stewart to be promoted to the political front ranks.

“Maybe it’s time Stewart was elevated from his relatively minor department and put in charge of both the ministry of defence and Britain’s anti-terror strategy,” he wrote. “At least he appears to be on our side, which is more than can be said for most of the two-bob, gutless clowns running the show these days. Only last week, some overpaid liberal brief called Max Hill QC, who is supposed to be reviewing our terrorism legislation, bleated that young British jihadis should be allowed to come home and be ‘reintegrated’ into society.”

Yasmin Alibhai-Brown, a prominent Leftist columnist, said Mr Stewart was “othering” by creating a cultural enemy to set the conditions for extra-judicial assassinations. “I was speechless,” she said, pointing out a wide range of motivations spurred British citizens to go to Europe to fight. “It includes children, too,” she wrote. “Shall they be wiped out then.”

Security experts pointed out that Mr Stewart was engaged in wishful thinking. Returnees were an existing threat that must be faced up to. Soufan’s director Richard Barrett, a former UN co-ordinator of terrorism policy, said the phenomenon was placing great strain on Western intelligence agencies. “All returnees, whatever their reason for going home, will continue to pose some degree of risk,” he said. “The hope is they won’t come back. Some of them are going to come back, many of them are back already. You can’t just escape the problem by saying ‘I hope it doesn’t occur.”

The Soufan report said returnees presented profound challenges. “While returning Foreign Fighters have not as yet added significantly to the threat of terrorism around the world, the number of attacks inspired or directed by the Islamic State continues to rise,” it said.

• There are now at least 5,600 citizens or residents from 33 countries who have returned home. Added to the unknown numbers from other countries, this represents a huge challenge for security and law enforcement entities.

• States have not found a way to address the problem of returnees. Most are imprisoned, or disappear from view. There will be a need for more research and information sharing to develop effective strategies to assess and address the threat.

• Returnee women and children represent a particular problem for States, as they struggle to understand how best to reintegrate these populations. Proper mental health and social support mechanisms will be especially relevant in the case of children.