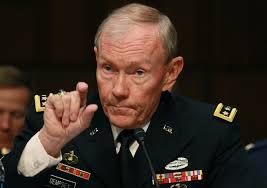 A new national military strategy released Wednesday by Gen. Martin Dempsey, chairman of the Joint Chiefs of Staff, takes more notice of aggressive states like Russia and China and warns that the U.S. military’s technological edge is eroding in an emerging era of major power competition. It’s a sharp departure from the last policy document published in 2011, when Moscow merited barely a mention, and the Pentagon focused on reordering its global priorities as it began to disentangle itself from the long wars in Iraq and Afghanistan.

The tone in 2015 is darker, with Dempsey saying that there is a “low but growing” risk of the United States fighting a war with a major power in the coming years. He warned that Moscow “has repeatedly demonstrated that it does not respect the sovereignty of its neighbors and it is willing to use force to achieve its goals” — particularly when it comes to Russian troops operating in Ukraine and supplying the pro-Moscow rebel forces fighting in that country’s east.

Dempsey also noted the growing Iranian and North Korean ballistic missile and nuclear capabilities, but took a more hot-and-cold approach to China. While “we support China’s rise and encourage it to become a partner for greater international security,” Dempsey said Beijing’s claims “to nearly the entire South China Sea are inconsistent with international law.”

In a significant admission that may hint at continued repositioning of U.S. troops around the globe to respond to emerging crises, Dempsey also wrote that “as a hedge against unpredictability with reduced resources, we may have to adjust our global posture.”

And in a nod to the fight against powerful, elusive nonstate actors like the Islamic State, al Qaeda, and their affiliated groups, Dempsey said that the United States and its allies have to be prepared to wage long, at times uncertain, fights around the globe. Washington and its allies are more likely to face a series of “prolonged campaigns than conflicts that are resolved quickly,” he said.

While the fight against the Islamic State may be long, Dempsey said later Wednesday that the group’s brutality against the very people that it claims to be liberating will cause it to “eventually collapse under the weight of their own contradictions.” That will come “with a little help from coalition partners,” Dempsey told reporters at a Pentagon briefing with Defense Secretary Ash Carter.

The brief press conference kicked off on a more upbeat note: Carter announced the nomination of Lt. Gen. Robert Neller to be the next Marine Corps commandant, replacing Gen. Joe Dunford, who has been tabbed as the next Joint Chiefs chairman when Dempsey retires later this year. Neller previously served as deputy commander of Marine forces in Iraq’s Anbar province during some of the bloodiest fighting there a decade ago — and where hundreds of U.S. troops are deployed again to train Iraqi security forces. Dunford’s Senate Armed Services Committee nomination hearing is set for July 7.