You are here: Home / Senza categoria / New NATO scientific projects tested in Italy to help with the fight against Islamic terrorism 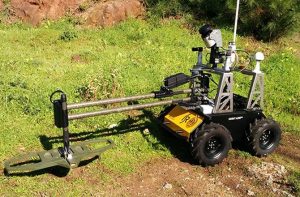 Three technologies on detection and clearance of improvised explosive devices (IEDs), namely a semi-autonomous robot for detection of mines and IEDs, a lightweight and easy-to-use mine detector and a handheld detector for dirty bombs, were successfully tested in Florence, Italy on 17 and 18 October 2018, like reported by defencetalk.com.

These technologies are developed in the framework of NATO’s Science for Peace and Security (SPS) Programme.

Terrorist attacks in Europe and elsewhere have shown the vulnerability of critical infrastructures, such as metro stations and airports, to the use of hazardous objects like concealed weapons or explosives. Cooperation between scientists and experts is critical to develop best practices and technologies to counter these threats.

“Without adequate regional and international cooperation, it would be impossible to address the variety of issues relating to threats from explosives today,” said Robert Weaver, NATO Deputy Assistant Secretary General for Emerging Security Challenges at a two-day workshop organised in cooperation with the University of Florence.

The first technology tested at the workshop was a semi-autonomous robot for detection of mines and IEDs, which was developed by a project co-led by Italy, the United States and Ukraine. It is named ‘U-GO First’ to prevent casualties in search of explosives and to use robots instead. It uses new impulse radar and 3D data for real-time detection.

The second project is a simple, lightweight, easy-to-use and cheap handheld ultra-wideband (UWB) mine detector, developed by a project co-led by Norway and Ukraine and produced through 3D printing.

The third – and last one – is a handheld detector for dirty bombs to be used mainly in port and border security and developed together with Australia, Croatia, Japan, Portugal and Slovenia. A dirty bomb is one type of radiological dispersal device that combines conventional explosives, such as dynamite, with radioactive material.

As Prof. Lorenzo Capineri, co-director of the Holographic and Impulse Subsurface Radar for Landmine and IED Detection project and professor at the University of Florence, remarked, “Participants diffused the results of their work, compared the developed methods and found possible synergies to increase the technological readiness level of the sensors, the electronics systems and the detection methods of these projects”.

Over 50 scientists and experts from 16 NATO and partner countries attended the workshop and assessed the results and achievements of their activities. ”This event was a great opportunity to assess how SPS projects in the field of explosives detection contribute to the development and refinement of scientific and technical knowledge,” concluded Dr Eyup Turmus, scientific advisor of NATO’s SPS Programme and chairman of the workshop.

“In particular, the field test session with prototypes showed the concrete outcomes of years of research in this scientific area and will help us determine future actions and direction of the SPS Programme.”