You are here: Home / Senza categoria / New military tactics and equipment for Russians in Syria 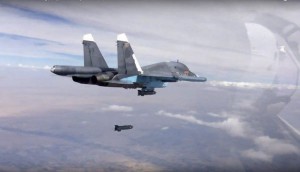 Two weeks of air and missile strikes in Syria have given Western intelligence and military officials a deeper appreciation of the transformation that Russia’s military has undergone under President Vladimir V. Putin, showcasing its ability to conduct operations beyond its borders and providing a public demonstration of new weaponry, tactics and strategy.

The strikes have involved aircraft never before tested in combat, including the Sukhoi Su-34 strike fighter, which NATO calls the Fullback, and a ship-based cruise missile fired more than 900 miles from the Caspian Sea, which, according to some analysts, surpasses the U.S. equivalent in technological capability.

Russia’s jets have struck in support of Syrian ground troops advancing from areas under the control of the Syrian government and might soon back an Iranian-led offensive that appeared to be forming Wednesday in the northern province of Aleppo. That coordination reflects what U.S. officials described as months of meticulous planning behind Russia’s first military campaign outside former Soviet borders since the dissolution of the Soviet Union.

Taken together, the operations reflect what officials and analysts described as a little-noticed — and still incomplete — modernization that has been under way in Russia for several years, despite strains on the country’s budget. And that, as with Russia’s intervention in neighboring Ukraine, has raised alarms in the West.

In a report this month for the European Council on Foreign Relations, Gustav Gressel argued that Putin has overseen the most rapid transformation of the country’s armed forces since the 1930s.

“Russia is now a military power that could overwhelm any of its neighbors, if they were isolated from Western support,” wrote Gressel, a former officer of the Austrian military.

Russia’s fighter jets are, for now at least, conducting nearly as many strikes in a typical day against fighters opposing the government of President Bashar Assad as the U.S.-led coalition targeting the Islamic State has been carrying out each month this year.

The operation in Syria — still relatively limited — has become, in effect, a testing ground for an increasingly confrontational and defiant Russia under Putin. In fact, as Putin himself suggested Sunday, the operation could be intended to send a message to the United States and the West about the restoration of the country’s military prowess and global reach after decades of post-Soviet decay.