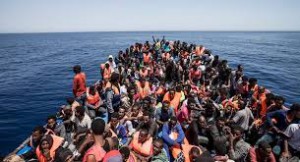 Libya’s new government will curb illegal migration, the Libyan Charge d’Affairs in Italy told AGI. Azzedin Al-Awami said it will be able to act, with the support of the EU, when the Treaty of Friendship and Partnership between Italy and Libya is renewed.

“Libya has more illegal immigrants than other countries, because of the size of the sea and land frontier, which stretches for over 7,000 kilometres,” he said in an interview. He stressed that, “from a military point of view, Italy could limit itself to providing logistical support to the legitimate Libyan army”.

The Italian government will “have to demonstrate its ability to talk with Libyan parties with a grassroots base in society … not just with factions supported by the armed militia groups”.

There were still obstacles to forming a new Libyan government, “the biggest being the presence of armed militia with control over some areas, and the different needs of the factions” and the regional powers, “as well as the lack of political experience to … work with equilibrium on the constitutional declaration with regard to the mechanisms for forming a government and gaining a confidence vote.”