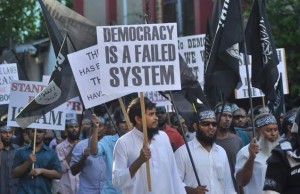 The island nation of the Maldives has passed a law allowing authorities to install cameras in the homes of people they suspect of being sympathetic to the Islamic State group and arrest them if they try to join the militants overseas, the home minister said Thursday.

The anti-terror legislation, signed by President Yameen Abdul Gayoom on Wednesday, follows reports that many IS recruits were coming from the Indian Ocean archipelago of just 350,000 people.

The opposition criticized the law as draconian and warned it could be used to crack down on dissent.

“This is an unconstitutional law that will be used to suppress dissent and jail opposition leaders,” opposition Maldivian Democratic party spokesman Hamid Abdul Gaffoor said.

The actual number of Maldivian fighters in the extremist Sunni group is unknown, but local newspapers carry frequent reports of Maldivians wounded or killed while fighting in the Middle East.

Home Minister Umar Naseer said the government has details on seven Maldivian IS fighters, while another 10 people were stopped in Sri Lanka and Malaysia on suspicion of trying to get to Syria to join the group. They were not arrested because there previously was no legal provision, Naseer said. The new law, however, would allow for arrests.

The government can now seek a court order to fit suspected IS sympathizers with electronic monitoring tags, listen to their phone conversations and prevent them from traveling abroad if the trip is deemed suspicious.

The legislation allows the president to declare any group a terrorist organization. Anyone belonging to such an organization would then be in danger of being imprisoned for up to 15 years.

Anyone who gives a speech that authorities believe encourages terrorism can be prosecuted, along with any media that report on such speeches. Authorities can hold suspects for 96 hours for questioning without a court hearing, and suspects are allowed to meet with their lawyers only in the presence of police.

Naseer said the government would not abuse the powers, and insisted the intention of the law is to prevent violence.

But in a country where the vice president, former defense minister and former president are all currently behind bars in different cases, critics say the legislation is a major cause for concern and evidence that the politically tense nation is sliding back toward autocracy.

Former President Mohamed Nasheed’s lawyer, Amal Clooney, recently said the Maldives has the world’s highest IS recruitment per capita, but gave no details or numbers.

Nasheed is appealing a 13-year prison sentence for ordering the arrest of a judge while he was president in 2008-11. He was forced to resign amid opposition protests following the judge’s arrest, which courts said was unconstitutional.

Gayoom’s former defense minister, Mohamed Nazim, was imprisoned for 11 years for firearm possession, and current Vice President Ahmed Adeeb was arrested over the weekend on suspicion of treason for allegedly plotting to assassinate Gayoom in a boat explosion on Sept. 28.