You are here: Home / Senza categoria / New IS video: French Muslims should go to Syria or launch home attacks 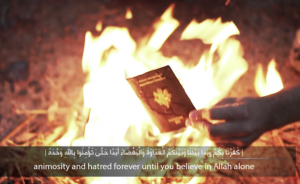 In video titled ‘What are you waiting for?’ fighters speaking fluent French burn their passports and pledge allegiance to IS

In the wake of Friday night’s bloody attacks in Paris, the deadliest to hit Europe in over a decade, the Islamic State group released a video urging French Muslims to attack France or travel to Syria and Iraq where IS controls vast swathes of terriory.

The seven-minute video, which uses as a soundtrack an Islamic hymn popular among IS supporters, was released under the title “What are you waiting for?”.

The footage begins with a group of men standing in a small circle placing French passports on a fire.

A man who is refred to as Abu Osama al-Faransi then urges French Muslims to stop paying taxes “which they use to fight us and kill our sisters, our women and our children”. He goes on to urge people to travel now warning that “a day may come when the borders will be closed and you will be left only with tears and regret”.

France is taking part in an air campaign aimed at degrading Islamic State’s fighting capabilities, and pledged on Saturday that it would continue to do so despite Friday’s devastating attack.

Later, a fighter identified as Abu Salman al-Faransi delivers a message “to my brothers and sisters in the land of kufr [apostasy] – France”.

“Operate within France. Don’t let them sleep for fear and terror. There are weapons and cars available and targets ready to be hit.”

The video’s release was followed by a written statement, believed by experts to be genuine, claiming responsibility for the Paris attacks.

Hundreds of French nationals are thought to have left the country already to fight alongside Islamic State.