You are here: Home / Mediterranean / New international terrorism, theme of meeting in Algiers 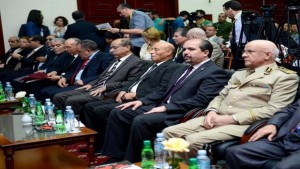 A meeting on the “New international terrorism: standards and mechanisms” was held Tuesday in Algiers by the National People’s Assembly (Lower House) in the presence of several members of the government and military and civilian experts in the fight against this transnational scourge.

In a speech at the opening of the meeting, Speaker of the Lower House Mohamed Larbi Ould Khelifa stressed the need to continue the fight against terrorism by combining all efforts, adding that Algeria policy recommended a comprehensive and multidimensional struggle to eradicate this global threat.

Minister of Religious Affairs and Wakf Mohamed Aissa, saidthat terrorism had extremist ideological motivations, far from any religious affiliation, recalling that Islam was a religion of tolerance and peace.

For his part, Minister of Relations with Parliament Tahar Khaoua highlighted the “important” role played by President of the Republic Abdelaziz Bouteflika, in the consolidation of counterterrorism while taking into account the socio-political, economic, security and cultural aspects.

Chairman of the Commission of National Defense at the Lower House Bensalem Belkacem stressed that Algeria, which has foughty terrorism in the 1990s, was victorious in its ongoing fight against the terrorist groups.

The information recently provided by the United Nations show that Algeria was a land of peace and international reconciliation, he added.

Held by the Commission of National Defense at the Lower House, this one-day meetingaims to shed light on the mutations of terrorism and its threats both nationally and internationally, according to organizers.