You are here: Home / MidEastGulf / New information about the Islamic State’s hierarchy 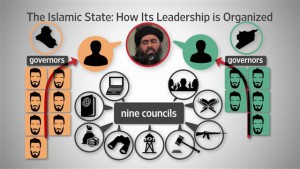 The New York Times reported on June 8 that according to United States officials, American intelligence agencies have extracted valuable information about the Islamic State (IS)’s leadership structure, financial operations and security measures by analyzing materials seized during a Delta Force commando raid last month that killed a leader of the terrorist group in eastern Syria.

The information harvested from the laptops, cell phones and other materials recovered from the raid on May 16 has reportedly helped the United States identify, locate and carry out an airstrike against another Islamic State leader in eastern Syria, on May 31. American officials expressed confidence that an influential lieutenant, Abu Hamid, was killed in the attack, but the Islamic State, which remains resilient, has not yet confirmed his death.

The article notes that Mr. Baghdadi meets periodically with regional emirs, or leaders, at his headquarters in Raqqa in eastern Syria.  To ensure his safety, specially entrusted drivers pick up each of the emirs and demand that they hand over their cell phones and any other electronic devices to avoid inadvertently disclosing their location through tracking by American intelligence, the officials said.

Wives of the top Islamic State leaders, including Mr. Baghdadi’s, play a more important role than previously known, passing information to one another, and then to their spouses, in an effort to avoid electronic intercepts.

The raid on the multistory residence of Abu Sayyaf, described by American officials as the group’s top financial officer, reportedly illustrates that American intelligence on Islamic State leaders is improving.  At least one informant deep inside the group played a crucial role in helping track Abu Sayyaf, said a senior military official who was briefed on plans for the raid.

Abu Sayyaf’s wife, Umm Sayyaf, who was captured in the operation, has also provided information to investigators, one senior American official was quoted as saying by The New York Times.

Defense Secretary Ashton B. Carter said last month that the killing of Abu Sayyaf dealt a “significant blow” to the group.  The militant leader was said to be involved in the Islamic State’s kidnap-for-ransom activities and helped direct its oil, gas and financial operations that raised the funds necessary for the organization to operate.

Since the raid, senior administration officials and top military officers have dropped only broad hints about the value of the materials that were scooped up in the predawn operation, which was carried out after weeks of surveillance from satellite imagery, drone reconnaissance and electronic eavesdropping, American officials said.

Over the past decade in Iraq and Afghanistan, the American military and intelligence agencies have reportedly developed vast expertise in analyzing materials seized in commando raids, sometimes quickly enough to generate new raids within a matter of hours.

Within two weeks of the raid, American officials were able to use information gathered from the materials to attack Abu Hamid in the vicinity of Ash Shaddadi, near Hasakah in northeast Syria.  American officials described him as the emir of Shariah and tribal affairs.

The materials also revealed new details about how the Islamic State has allocated revenue from oil production.  About half goes to the group’s general operating budget; the remainder is split roughly between maintaining the oil-field production facilities and for salaries to the workers, American officials said.

These workers, once thought possibly to be conscripted locals, are now believed to be salaried Islamic State employees, thus making them legitimate targets, officials said.

American counterterrorism analysts have learned new information about the Islamic State’s hierarchy.  One leader, Fadel al-Hayali, also known as Abu Mu’taz, who had been believed to be the head of the Islamic State’s military council, appears to have played an even more important role than previously known.

The military council has a subgroup known as the Security Council, which is in charge of leading Islamic State assassinations, kidnappings, interrogations and other attacks.

There were reports in November 2014 and again in February that Abu Mu’taz died in coalition airstrikes but the Islamic State never put out a confirmation, he said.

Although Abu Sayyaf himself was not well known, he was important as much for who and what he knew about the Islamic State’s hierarchy and operations as for his actual job, American officials and independent analysts said.