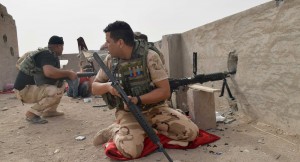 Some 250 Iraqis from the Anbar province will be trained for fighting with the national militia as part of joint efforts by Iraqi instructors and specialists from the US-led coalition, a member of a local council said Sunday.

About 70 percent of Karma territory is currently under control of militia but the rest was still due to be liberated from ISIL extremists, Karma council member Raed Dulaimi told the Iraqi Alsumaria TV channel.

“Some 250 fighters from Karma district have joined the program of training militia in the military camp Taji north of Baghdad. Instructors from Iraq and the international coalition will be in charge of the training,” Dulaimi said.

The training process is expected to take 30 days, he added.The Iraqi Security Forces are conducting a large-scale military operation against ISIL in a number of areas of the country, including the western Anbar province. The forces have been trying to recapture Ramadi, the capital of the province, from Islamic State militants since July.