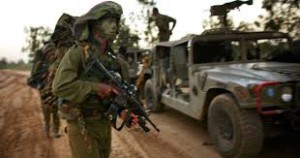 Speaking at the brigade’s inauguration ceremony, Eizenkot said, “Looking to the north and seeing the brazen statements made [by Hezbollah] and the overall atmosphere from Lebanon, the threats made by Islamic State commanders in Iraq and Syria, the security escalation we have been dealing with in Judea and Samaria, and the threats on the southern front, we must make the most of our abilities.”

He said the Commando Brigade “will serve as the front guard and represent the ability and spirit of the IDF in the future. I have every confidence that you will be vigilant and ready should we be ordered to fulfill our purpose — to protect and defend the State of Israel, ensure its existence, and, if we are put to the test, defeat any enemy.”

Former Egoz Commander Col. David Zini will head the new brigade, formed as part of the military’s multi-year work plan. The newly minted brigade is under the command of the Infantry Corps’ Fire Formation.