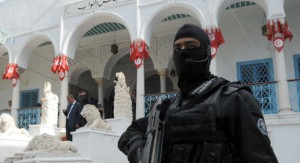 In the last year Tunisia’s security forces have arrested over 1,500 people suspected of belonging to jihadist networks within the country, wrote Themedialine.

Hundreds of those arrested have fought in Syria, according to Tunisian officials, and were arrested after their return home.

Last month, two assailants killed at least 20 foreign tourists, in addition to a police officer, after taking them hostage inside the national Bardo museum. The rescue operation ended with the killing of the two assailants. Over 40 people were injured in the attack, which targeted one of the capital’s most popular tourist sites.

“The people behind this attack perpetrated on the Bardo museum wanted to attack the country’s tourism industry,” Muhammad Ennasr president of the Tunisian parliament and senior member of Nidaa Tounes party (Call for Tunisia) told The Media Line. “It is also a challenge to the Tunisian democratic process.”

He went on to say “We’re working on fighting terrorism and this is a common fight along with other countries,” adding that “terrorism isn’t just a threat to our country, it’s a threat to all the countries”.

A few days following the deadly attack, Prime Minister Habib Essid said he noticed several security-related deficiencies while visiting the site of the assault. He took the decision to dismiss six of the capital’s security chiefs including that of the Bardo area.

In an interview with a French magazine, President Beji Essebsi admitted that “the police and intelligence services had not been thorough enough in protecting the museum.”

The Interior Ministry’s announcement was based on intelligence gathering, officials confirmed.

The country is mounting a campaign of arrests across its territory, seeking suspects, most of whom are young adults that the authorities believe to be part of an expanding jihadist movement. To date, Tunisian authorities say more than 2000 of its citizens have travelled to Syria in order to join the ranks of Islamic State.

In a report from 2014, the U.S. State Department’s bureau on counterterrorism highlighted the growing security threat that Tunisian jihadists represent. The report suggested that the number of Tunisians involved is higher than previously suspected.

In an Op-ed published last year in the Washington Post, Tunisian president Beji Caid Essebsi wrote that he has three goals for his presidential term aimed at fighting extremism.

“To fight extremism, we will need to pursue a two-pronged strategy: both “hard,” through stricter control of our borders and a more robust and technologically advanced security response, and “soft,” based on better intelligence-gathering, working to return our mosques to their spiritual function and barring entry to foreign preachers,” Essebsi wrote.

The government has worked to dismantle radical sleeper cells and prevent unauthorized imams from preaching. Yet there is concern that underground jihadist networks continue to operate, often with close ties to neighboring countries. Analysts say that Tunisia’s vast southern border, shared with Libya, is especially difficult to control.

Jihadists frequently use social networks as a recruitment tool. For example, Tunisian authorities said the two terrorists in the most recent attack used a coffee shop’s Wifi connection before targeting the capital’s museum.

AQIM is believed to be responsible for the majority of attacks perpetrated against Tunisian security forces. Katibat Uqbah Ibn Nafi, an organization affiliated with AQIM, has sat up training camps in the Kasserine region’s rugged Chaambi mountain range on the Algerian border.

The border region near Jebel Chaambi is a constant threat and a high security concern for both Tunisia and Algeria.

Mohammed Burefaah, a jihadist and former commander in the Algerian People’s National Army, told Algeria’s Arabic newspaper Al Khabar “it is impossible for the Tunisian army to control Jebel Chaambi.”

According to Burefaah ”the Algerian army had to help the Tunisian army in this crisis, because Tunisians do not have the capabilities to face it alone.”

After many years of working on this border for the Algerian army, Burefaah explained why it’s so difficult for the military to control this region.

“The Jebel Chaambi range links the Tunisian and Algerian mountains together, this is why it constitutes — along with the al-Khadra triangle, a vast desert in which the Algerian, Tunisian and Libyan borders meet — the most dangerous point from which the terrorist threat can get to us,” he told the Algerian newspaper.

The Uqba Ibn Nafi Cell, who have used this terrain to locate training camps, is the most active terrorist group in Tunisia, home to more than 10 million people.

Unlike the expressed view of the government that the two assailants perpetrated an isolated attack on the Bardo national museum, many believe that the attack is a sign that the country’s militant groups are changing and adapting their tactics.

Relocating the focus of their attacks, which used to be contained in a specific and rugged mountainous zone, into an urban area where police forces are much less equipped and trained to fight, is likely to be the Jihadist’s next move.

Tunisians’ optimism, despite the fear that terrorism aspires to, is unswerving. Tunisians are reaffirming their faith in their country’s security forces who they believe are committed to the fight.

“We’re people who don’t love to see such terror happen and we don’t accept it for others as well,” Messaoud, an unemployed man of 57, told The Media Line.

While sitting in a local Café Gazelle, along with his retired friend, he openly speaks his mind.

“We’re optimistic and have faith in our army and police forces. They can defeat terrorist groups,” he concludes.