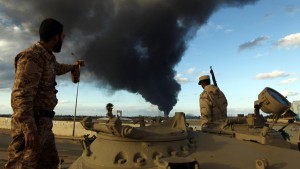 Four Libyan soldiers were killed and six wounded in fresh fighting with Islamist groups in the eastern city of Benghazi on Sunday, medics and military officials said.

Forces loyal to Libya’s internationally recognised government have been fighting Islamist groups in the country’s second-largest city Benghazi since last year, part of a wider struggle since Muammar Gaddafi was overthrown in 2011.

A tank battalion fought with Islamist brigades which had been trying to advance in the west of Benghazi, military officials said. Fighting raged until late in the evening.

Army forces backed by armed residents have regained some areas in Benghazi lost last year. But critics say their outdated war planes and helicopters lacking precision guns have damaged parts of the city without gaining much on the ground.

There was also fighting on Sunday between army units loyal to the official government and Islamic State outside the city of Derna to the east of Benghazi.

The air force flew a strike against Islamic State positions outside Derna, said a military spokesman. Both sides also clashed with ground forces in the same area.

Islamic State started this month an offensive to try retake Derna after a rival Islamist group had expelled it in June. Army forces are based outside Derna but have not tried to take the city, a jihadi hotspot.

The fighting on several fronts highlights the chaos in Libya, where armed groups back two governments vying for control. The official prime minister has been based in the east since the capital, Tripoli, was seized by a rival group which set up its own government.

Both sides command loose coalitions of former anti-Gaddafi rebels which have split along political, regional and tribal lines.

Islamic State has exploited the chaos by taking over several places, executing foreigners and launching attacks against embassies in Tripoli.