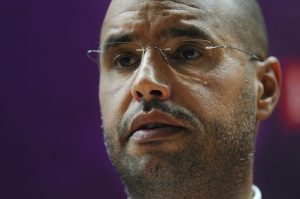 Relations with Russia are now at the heart of the problem that is the Libyan maelstrom, like reported by libyabizinfo.com.

The Trump administration in Washington is angry with Field Marshall Khalifa Haftar for his moves to rebuild ties with Moscow, particularly military ties. The White House is also said to be annoyed with the efforts of Government of National Accord’s Prime Minister Fayaz Sarraj at what it sees as doing much the same.

So new alliances within Libya are again being formed and since the revolt in 2011 these ties have always been temporary and the parties tend to doublecross each other. A sad fact. It is time to realise that the tribes supporting former strongman Muammar Gaddafi, and individuals Saif Al Islam and Aisha Gaddafi, can play important roles in unifying the country before the Americans and Russians and their surrogates make it their playground, fracturing the country.

Last week was the first anniversary of the General National Accord (GNA), created by the UN. The government, one of three, but the one recognised by the West, has achieved nothing whatsoever to improve or even have a significant impact on Libyan affairs. To compound this, an acute emergency has emerged revolving around further direct sales by Cyrenaica (East Libya) of oil bypassing Tripoli and the West. If this remains unresolved it would split the country into two. This has caused tremendous infighting between the National Oil Company and a variety of diverse interests.

It was only a week ago that the Misrata Military Council claimed it had overthrown the Misrata Local Council, a locally elected body with the city’s business community. Tensions are escalating between more ‘moderate’ Misratan factions, who largely support the GNA in Tripoli, and more hardliner factions who are opponents of both the GNA and Haftar and largely support ‘the other PM’ Khalifa Al Ghwell’s National Salvation government which was evicted from Tripoli. Many are surprised that Misrata, after a successful campaign to oust Daesh (the self-proclaimed Islamic State of Iraq and the Levant) from Sirte would turn on each other.

This Misrata drama is part of a new dynamic that is entering the Libyan civil war. But there is an emerging trend that is going to shock the world: The Gaddafis may be seeking a Truth and Reconciliation Commission, similar to South Africa’s, in order to bring unity to the country.

Specific Libyan tribes are backing the Gaddafi clan and perhaps with the backing of Haftar, a new attempt at unification may appear that ousts the GNA and other Tripoli militias from the political scene.

When Saif was released from his Zintan prison, the question of what role he could play in the war-torn country became relevant. He is seeking support from people inside Libya and abroad in an attempt to come up with a plan to salvage the country. Most of the tribes that supported his father see him as a redeemer and are willing to support him in any political process to bring about national reconciliation.

It is to this point that national reconciliation must be addressed. South Africa’s process helped to unify the country after decades of apartheid.

What makes this possible for the Gaddafis may be Haftar. He is close to the Elders of Warfalla tribe that support him in the war against terrorism. The Warfalla tribe is the biggest tribe in Libya, located in the Bani Walid and Sirte area. The Warshfana tribe is the second biggest located to the south-west of Tripoli. Both tribes are from the west of Libya and both are against extremists and very sympathetic to the Gaddafis. Importantly, the tribes believe that the Gaddafis can reach an accommodation with Libyan parties to forgive crimes committed by some rebels since 2011.

Already, results are being seen: In the past week, other Libyan authorities have released some Gaddafi-era nobles from prison.

While the spotlight is on Saif, his sister Aisha also is generating attention. She is pragmatic and has an acute political acumen and a sharp wit.

Aisha’s victory in the European Court of Justice against the UN Security Council-sponsored sanctions last week may well be the first indicator that frozen Gaddafi money may be released. Billions of dollars lie in frozen funds belonging to the Libyan people. Aisha and Saif can begin to work in tandem to work along with all Libyans to rescue the country from its dreadful plight.