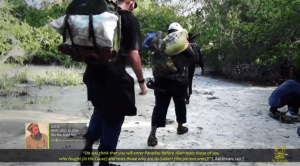 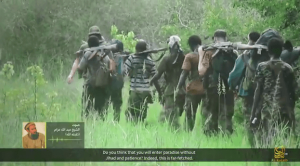 Al-Shabaab posted a new video online that showed white recruits among the members of the Somali terror group.

The fighters don’t speak, so it’s unknown if they are American, European or even Chechen. But Shabaab recruitment in the U.S. has long concerned counterterrorism officials.

The video from Shabaab’s media arm, Al-Kataib, shows a contingent of fighters hiking through brush toward their Kenyan targets. The footage then moves to an August nighttime firefight in Bothai, a village in Garissa County, which borders Somalia. Shabaab fighters are seen rooting through a room with Kenyan police uniforms.

It also features the voice of Anwar al-Awlaki, stating in English that “no peaceful means” can attain their goals.

Also shown is an attack on a church in the town of Hindi, Kenya, close to the Dodori National Reserve near the coast — “cleansing Muslim lands from the symbols of disbelief.”

Shabaab fighters burned down the church and killed nine in the July attack. Police at the time blamed the bloody assault on coastal separatist group the Mombasa Republic Movement, who denied any role in the attack.

The video shows the terrorists tearing down the simple banner for the Hindi Apostolic Church, marked with a cross, and throwing it on a fire that eventually engulfs the church.

One villager appears on camera and is asked why he was spared when the others were killed. “Because I am a Muslim and I believe that there is no God worthy of worship except Allah and Muhammad is the messenger of Allah,” he replies. “Those who were killed were Kuffar [disbelievers]. They have no religion and no purpose in their lives. The only thing they do is oppress the Muslims.”

The video tries to rally Muslims in Nairobi and Mombassa to come “burn the houses of the Kuffar here on the coast.”

“Before, jihad was far away in Somalia, now it has come knocking on your doors. It’s time to wake up.”

The video concludes with a raid on a Kenya Wildlife Service Camp in the same county.

While in Washington last August, Somali President Hassan Sheikh Mohamud warned that “there are more non-Somalis than Somalis at the highest level” of Al-Shabaab now.

“We have people from North America, people from Europe, people from Asia, the Gulf… we have all kinds of people in place but still Somalia has the name associated with Al-Shabaab,” Mohamud said.

“Al-Shabaab is a group based on an ideology, and we all know that ideologies have no citizenship and have no boundaries. Al-Shabaab is Somali for one reason only — they operate in Somalia, they have their base in Somalia, they have training camps in Somalia.” And, he added, they ably use Somalia as a transit hub for terrorists, linking Asia and Africa — “the terrorists move here and there.”

The president told PJM after a Brooking Institution event that “Boko Haram, Al-Shabaab, all of them, these are terrorist organizations — they are linked, they live for each other, they support each other and they are connected globally”

“It’s not just an issue of one country or one region — it’s a global phenomenon that needs to be addressed globally,” Mohamud added.

Counterterrorism officials in the U.S. have acknowledged that Al-Shabaab recruitment here is alarming, but the focus has largely been on young people in Somali immigrant communities. For instance, in June a former Beltway cabbie, Somali-born Liban Haji Mohamed, was added to the FBI’s Most Wanted Terrorists list.

Secretary of State John Kerry flew to Somali a month ago but didn’t leave the airport during the three-hour visit.

“The next time I come, we have to be able to just walk downtown,” Kerry declared to Mohamud.

A senior State Department official downplayed the al-Shabaab threat, telling reporters on a background call that the terrorists are “in some small pockets, and the AMISOM troops have been very effective in pushing them out of these pockets.”