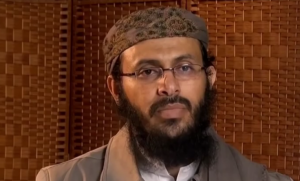 The newly appointed leader of Al-Qaeda’s Yemen branch called for attacks on the United States, as the U.N. announced the start of a weeklong truce in the war-torn country.

“All of you must direct and gather your arrows and swords against it,” the U.S.-based SITE monitoring group quoted Qassim al-Raymi as saying in an audio recording which was posted on social media. It said he was referring to the United States.

The recorded speech was his first since taking over after the death of Nasser al-Wuhayshi.

The call for attacks came as the U.N. said it expects an unconditional weeklong humanitarian pause in the fighting in Yemen to start Friday to allow the delivery of aid to some of the 21 million people in need.A Saudi-led coalition of Arab states has been bombing Iranian-allied Houthi rebels since late March in a bid to restore to power Yemen’s President Abed Rabbou Mansour Hadi, who has fled to Riyadh.

“U.N. Secretary-General Ban Ki-moon noted that the president has communicated his acceptance of the pause to the coalition to ensure their support and collaboration,” U.N. spokesman Stephane Dujarric said Thursday.

He added that the Houthis, the General People’s Congress and other parties had assured U.N. special envoy Ismail Ould Cheikh Ahmed that the pause would be fully respected with no violations from any combatants under their control.

“We feel we have the expressions necessary by all parties to announce the start of this pause Friday,” Dujarric said. “The secretary-general looks forward to the commitments of all parties to the conflict in Yemen to an unconditional humanitarian pause to start Friday … until the end of Ramadan.”

Discussions on the truce have been tough going for days, with Hadi and the Saudi coalition putting forward a list of demands before agreeing to the pause, diplomats said.

Over 3,000 people have been killed in the conflict and over a million displaced, and the U.N. has been urgently pushing for a pause to help the 80 percent of the population in the impoverished country.

Both sides largely observed a five-day truce brokered by the U.N. in May. The United Nations has raised Yemen to its highest level humanitarian crisis, placing it alongside emergencies in South Sudan, Syria and Iraq.