You are here: Home / Mediterranean / Nearly 9,000 Turkish-backed mercenaries sent to Libya from Syria 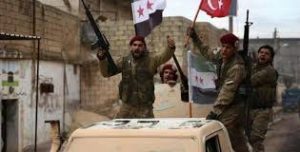 The number of Turkish-backed Syrian mercenaries who have been killed in Libya while fighting in the side of the “Government of National Accord” against the “Libyan National Army” continues to rise. SOHR activists have documented the killing of 11 Turkish-backed mercenaries, including a child under the age of eighteen, on several frontlines in Libya, bringing the total death toll of Turkish-backed Syrian proxies killed in military operations in Libya to 298, including 17 children under the age of eighteen, like reported by syriahr.com.

The fatalities are of the factions “al-Mu’tasim Division, Sultan Murad, Suqur Al-Shamal Brigade, Al-Hamzat and Suleiman Shah”. According to very reliable SOHR sources, the fatalities were killed in clashes on frontlines of Salah Al-Din in the south of Tripoli, Al-Ramlah near Tripoli Airport, Al-Hadabah Project area, Misrata and other areas in Libya.

On the other hand, SOHR sources have confirmed that reports circulated on social media about transporting fighters by Russia from Deir Ezzor to Libya are completely false.

SOHR sources say that pictures released on social media, which show fighters claimed to be from Deir Ezzor who transported to Libya by Russia, are of SDF fighters who were killed in earlier battles with ISIS in Al-Raqqah city.

Moreover, Russia is seeking to establish a new formation comprises factions which struck reconciliation deals with security services and other Russian-backed factions, in order to replace the Iranian forces in Syria.

Meanwhile, the Turkish-backed mercenaries transfer to Libya continues, as SOHR sources have confirmed the arrival of new batches of fighters in Libya via the Turkish airlift, after undergoing training courses in camps in Turkey. Some fighters of those transported recently to Libya had been former fighters of ISIS before they joined the ranks of the “National Army” factions, since many fighters of the Turkish-backed factions were ISIS ex-fighters.

Among the total number of recruits, some 150 children between the ages of sixteen and eighteen, have been recruited to fight in Libya, the majority of whom are of “Al-Sultan Murad” Division, by offering material incentives, exploiting their difficult living situation and poverty.