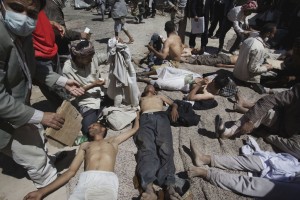 Clashes in Yemen killed at least 66 people in 24 hours, medics and security sources said Sunday, as pro-government forces pushed to oust rebels from a key stretch of coastline, like reported by afp.com.

Fourteen members of the pro-government forces were also killed.

Coalition warplanes and Apache attack helicopters have been pounding rebels in support of pro-Hadi forces advancing towards the Red Sea city of Mokha, military sources said.

By Sunday, loyalist forces were within 10 kilometres (six miles) of Mokha, they said, but the offensive has been slowed by mines laid by rebels.

The rebels took their dead to a military hospital in Hodeida, a major western port city they control, a medical source told AFP.

The hospital received 14 dead on Saturday and 38 on Sunday, as well as 55 wounded rebels, the source said.

On the pro-government side, 14 soldiers were killed and 22 wounded, according to medics in the southern port city of Aden where Hadi’s government is based.

The Saudi-led coalition intervened in Yemen in March 2015 in support of the beleaguered president.

But despite its massively superior firepower, the rebels and their allies still control the capital Sanaa and much of the central and northern highlands, as well as the 450-kilometre (280-mile) Red Sea coast.

United Nations peace envoy Ismail Ould Cheikh Ahmed arrived in Sanaa on Sunday for talks and to push a peace plan that would restore a ceasefire and lead to a political transition in the country.

The plan would lead to a political transition under which Hadi’s powers would be significantly reduced.

The World Health Organization says that more than 7,400 people have been killed since the coalition intervention began.

A UN spokesman has said the civilian death toll alone could top 10,000.