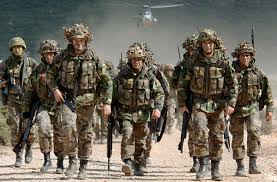 NATO’s new rapid reaction force must be able to respond to crises on the alliance’s southern flank, a top military commander said on Wednesday, in a caution to eastern European nations who see it only as a tool against any Russian threat.

As Europe’s migration crisis renews pressure on governments to act in Syria and Libya, NATO nations are divided over whether its new spearhead force — which could deploy several thousand troops in as little as two days — should be for defending the alliance or if it could do more in the Middle East.

The spearhead force “is designed to answer to the full level of NATO’s ambitions … not only collective defence but crisis management,” said French General Jean-Paul Palomeros, who is responsible for adapting NATO to future threats and in reference to NATO operations outside the 28-nation alliance.

“NATO is positioned in the east and in the south,” Palomeros told a news conference, adding that if needed, the spearhead force, which can operate by land, sea and air, could rely on NATO’s command centre in Naples, southern Italy.

The role of the spearhead force, due to be fully operational early next year, is likely to be discussed by defence ministers of NATO’s 28 members on Oct. 8 at a meeting in Brussels, but no immediate decisions are expected and a public weary of wars in Afghanistan and Iraq have made politicians cautious.

Palomeros’ comments come as NATO prepares to test its new force in the Mediterranean in October and November, the alliance’s biggest exercises in more than a decade.

Although the exercises are aimed at a host of threats, eastern European NATO members, including Poland, want to keep the focus on deterring any possible Russian attack in the wake of Moscow’s annexation of Crimea in March last year.

Warsaw sees the spearhead force as going some way to meeting its appeals for NATO to permanently station thousands of troops on its territory because of the crisis in Ukraine.

NATO member Turkey shares a 1,200 km border with Iraq and Syria, while all of the alliance’s member nations are part of the U.S.-led coalition against Islamic State.

NATO’s political leaders, including US President Barack Obama, agreed on the spearhead force a year ago, alarmed by the speed at which Russian troops infiltrated Crimea. The spearhead forces will be provided by allies in rotation.