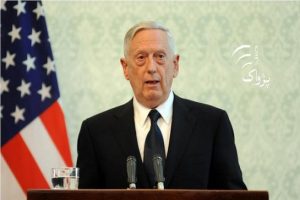 The US-led NATO mission in Afghanistan would continue till the time the Taliban are driven to a political settlement, the defense secretary said, like reported by pajhwok.com.

Jim Mattis, speaking to reporters, claimed President Donald Trump’s new strategy for Afghanistan was working as the Taliban had not been able to take control of more districts.

He denied reports the Pentagon had been consistently saying the situation was turning around in Afghanistan. “I don’t know that’s been the message from this building, I would not subscribe to that.”

Last August, he recalled, the US had announced that NATO would be going to hold the line. “We knew there would be tough fighting going forward.”

The murder of journalists and other innocent people was a great testimony to what the US stood for, and more importantly, what it stood against, the secretary remarked.

The Afghan military was being made more capable, he said, adding many of the personnel were special forces, advised, assisted and accompanied by NATO mentors.

“So the expansion there is why the enemy has been unable to take any district centres, provincial centres or make any advances there,” Mattis said in response to a question.

The US would stand by the Afghan people and government and the NATO mission would continue as the Taliban were being driven to a political settlement, Mattis continued.

A day earlier he said the Taliban and affiliated groups were conducting major attacks inside Kabul to grab international media attention. “We anticipated that they would do their best to try to bring bombs right into Kabul. They want them reported.”

A number of such attacks had been stopped, he asserted, regretting the terrorist groups were targeting voter registration centres. The Taliban realised the danger of the people being allowed to vote, he said.