You are here: Home / MidEastGulf / NATO will announce a plan to provide military advice to Iraq soon 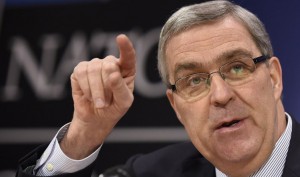 The US representative in NATO, Douglas Lute, said in a news conference before a meeting of NATO’s defenCe ministers on Wednesday and Thursday that “there is a plan on the table for discussion in the alliance may include advising Iraq on the reform of the security sector and to assist the government in the formulation of a programme for national security.”

“NATO may also provide advice to Iraq on logistical support and the structure of the military leadership,” he said.

He however pointed out that “this programme is not yet completed, but close to completion so I can say that in the coming weeks we can expect a declaration that says that the alliance finalised, with the Iraqi government, this special defence capacity-building programme.”

He explained, “it has not yet been decided whether the training will take place in Iraq or in another country.”

Sources in NATO said “the programme may include some training for the Iraqi army in specialised areas, although it is likely to be limited to a small number of officers and not a large number of soldiers.

It is mentioned that Iraq requested NATO’s help in training its security forces last December after the IS seized large areas in Iraq.