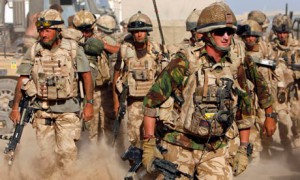 “Coalition special forces are on the ground in Kunduz advising their Afghan counterparts,” a NATO spokesman said.

The forces are comprised of US, British and German troops, a Western military source told AFP on condition of anonymity, without specifying the number.

NATO said US forces had also carried out three air strikes in total since Tuesday — two on the outskirts of Kunduz and one near the city’s airport, which is currently under attack by Taliban insurgents.

After years of costly involvement in Afghanistan, most NATO troops pulled back from the frontlines by the end of 2014, although a residual force of around 13,000 remains for training and counter-terrorism operations.

The Taliban’s incursion into Kunduz, barely nine months after the NATO combat mission ended, raises troubling questions over the capacity of Afghan forces as they battle militants largely on their own.

It has also renewed questions about Washington’s plan to withdraw most US forces next year.