You are here: Home / Europe / NATO to convene in extraordinary meeting to discuss Russia’s violation of Turkish airspace 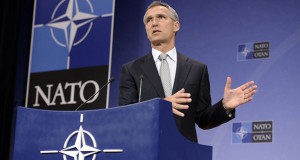 NATO allies will hold an “extraordinary” meeting Tuesday at Ankara’s request to discuss Turkey’s shooting down of a Russian fighter jet along the Syrian border, an alliance official said.

At the request of Turkey, the North Atlantic Council (NAC) will hold an extraordinary meeting at (1600 GMT).

The aim of this extraordinary NAC is for Turkey to inform Allies about the downing of a Russian airplane.

The North Atlantic Council consists of ambassadors from the 28 NATO member states.

Turkish jets shot down a warplane believed to be a Russian-type SU-24 after it violated the Turkish airspace near Turkey’s southern border with Syria, Turkish presidential sources said.

The warplane went down near Syria’s northwestern Turkmen town of Bayırbucak.

Turkey’s military said the downed foreign jet was given 10 warnings in five minutes before being shot down by two F-16 warplanes.

“A warplane of unknown nationality that breached Turkish airspace over Hatay’s [province] Yayladagi region at 9.20 a.m. [0720 GMT] was alerted 10 times in five minutes,” Turkish General Staff said in a statement, adding that the F-16s’ response was in line with rules of engagement.

The military added that Turkish planes patrolling the region encountered the warplane at 09.24 a.m. local time.

According to footage from the scene, the plane’s two pilots could be seen ejecting safely before the aircraft hit the ground in a huge of plume of smoke.