You are here: Home / MidEastGulf / NATO to boost Iraq mission 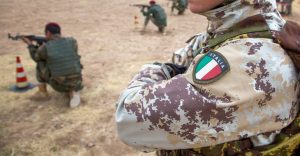 The North Atlantic Treaty Organization plans to expand its training mission in Iraq as the alliance hunts for ways to meet US President Donald Trump’s calls for it to play a bigger Middle East role, according to officials and like reported by alarabiya.net.

NATO intends to boost its 500-strong Iraqi operation by shifting personnel deployed for the much bigger US-led international coalition to fight terrorism in the country, the officials said on the condition of anonymity. The increase will be to around 700 members, according to one person.

US Defense Secretary Mark Esper said bolstering NATO’s role in Iraq is a central focus of his discussions this week in Brussels, where he arrived on Tuesday evening. The move would allow the US to press ahead with efforts to bring some troops home and shift the Pentagon’s focus more to the Indo-Pacific region, where it is seeking to counter China in areas including the South China Sea.

“A NATO increase can allow us to do a decrease and that way I can free up forces to go, what I’ve said before, back to the states, to increase their readiness or redeploy them elsewhere in the Indo-Pacific,” Esper told reporters on his plane en route to Brussels. “That’s my ambition. But the first thing is getting NATO in.”

The move will require the Iraqi government to express support publicly, a tricky domestic political task after the country’s parliament last month urged the expulsion of foreign troops. NATO Secretary General Jens Stoltenberg has been in touch with senior Iraqi authorities to pave the way for the bigger NATO mission.

“It’s a bit early for me to announce any specific decisions,” Stoltenberg said on Tuesday in Brussels at a press conference where he previewed a February 12-13 meeting of NATO defense ministers, who are expected to signal approval for the shift. “But we are looking into, for instance, what more we can do in Iraq in the context of training.”

ISIS
Trump fueled speculation about a bigger NATO footprint in the Middle East a month ago after Iran carried out attacks in Iraq on two bases used by American troops as retaliation for a US airstrike that killed top Iranian General Qassim Soleimani in Baghdad.

The American president vowed to get the US out of what he called “endless wars when he was campaigning for office in 2016. Yet heading into the 2020 election, Trump has sent more than 15,000 US troops to the Mideast since May to pressure Iran.

NATO has run a training mission in Iraq since late 2018 aimed at supporting Iraqi forces and preventing the re-emergence of Islamic State. The alliance suspended the mission on January 6 as a result of the heightened US-Iran tensions and security risks in the region.

Africa role
“We will resume training as soon as possible,” Stoltenberg said on Tuesday. “We are in close consultation with the Iraqi government.”

The planned expansion of the NATO operation in Iraq represents an initial response to Trump’s calls for the alliance to do more in the Middle East. NATO officials aim to weigh over the coming weeks and months what other additional activities could be undertaken, including in the Mediterranean region.

Esper praised France’s role in Africa but told reporters he’d like to see more European stepping up their commitments.

“There’s room for them to step up in Africa and do more,” Esper said. “I think that’s something we’ll continue to press the Europeans on.”