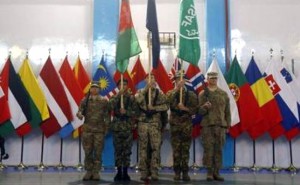 NATO says it will decide how quickly to scale back its military training and support mission in Afghanistan after assessing how well local security forces perform in this summear’s “fighting season.”

After talks between defense ministers from the alliance and Afghanistan in Brussels on June 25, NATO Secretary-General Jens Stoltenberg said, “We are going to assess the situation after the end of the fighting season this year,” he said, referring to the period between April and the first winter snows.

By then, he added, NATO will have more information about the security challenges the country faced and the capabilities of its forces.

NATO pulled out most of its combat troops from Afghanistan last year, leaving some 12,000 personnel to train local security forces in a mission expected to end at the end of 2016.