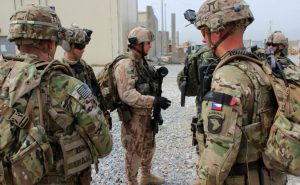 A soldier in the NATO-led Resolute Support mission was killed and two others wounded on October 22 by an apparent insider attack in the western province of Herat like reported by radiofarda.com.

A statement from the NATO mission’s headquarters in Kabul said: “Initial reports indicate the attack was committed by a member of the Afghan security forces.”

The Czech military said the slain soldier was from the Czech Republic. It said the two wounded soldiers were taken to the Bagram military hospital and their injuries were not life-threatening.

The Taliban claimed responsibility for the attack in an e-mailed statement.

It was the latest in a series of attacks in which Afghan forces have turned their weapons on international troops with whom they are working.

On October 18, a gunman wearing a uniform of the Afghan security forces opened fire on a gathering of security chiefs in Kandahar that included the top U.S. and NATO commander in Afghanistan, General Scott Miller.

Although three people were killed — including the powerful provincial police chief in Kandahar, General Abdul Raziq — Miller was not injured.

But U.S. Brigadier General Jeffrey Smiley was among 13 people wounded in that attack.