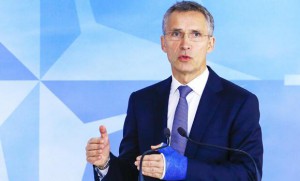 NATO is ready to help a future national unity government in Libya but remains opposed to any military intervention in the war-torn country, alliance chief Jens Stoltenberg said in an interview published Sunday.

“If a national unity government is formed, we are ready to help it and provide assistance,” Stoltenberg said in an interview with Italy’s Repubblica and several other European newspapers ahead of an international conference on Libya in Rome next Sunday. However, “we are not discussing a major new military operation in Libya, and I will not be recommending it,” he said.

His remarks were published just hours before Libya’s warring factions, who are holding talks in Tunisia, said they had reached an agreement on ending the political deadlock that has plagued the country since Muammar Qaddafi’s overthrow.

Former colonial power Italy will host the Dec. 13 conference which is aimed at preventing Libya’s total collapse and halting the advance of the extremist Daesh group.

Experts have warned that Daesh has been shifting to Libya as the world focuses on its traditional power bases in Iraq and Syria, taking advantage of the chaos as rival militias and governments battle for power.