You are here: Home / Europe / Nato ready to help EU navies on sea migrants, if asked 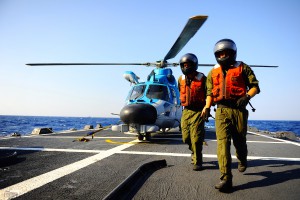 Nato remains ready to help clamp down on migrant smugglers in the Mediterranean, as plans to expand the EU’s naval military operation get under way.

A Nato official told this website on Thursday (27 August) the alliance remains “ready to help if there is a request” made by the European Union.

Meanwhile, the EU’s foreign policy chief, Federica Mogherini, said Thursday that talks are underway to allow the EU’s naval operation – EUnavfor Med – “to act in the high seas to tackle the criminal networks in a more effective way”.

EU defence ministers will also be meeting next week in Luxembourg to discuss the operation.

Launched in June with a mission “to identify, capture, and dispose of vessels”, the anti-smuggling assault is still in its initial surveillance-only phase.

The one-year mission includes the Italian flagship “Cavour”, the British warship “Enterprise”, two German warships, and air assets from France, Luxembourg, Italy, and the UK, including two submarines, deployed for their advanced surveillance and detection capabilities.

Mission head admiral Enrico Credendino told EU ambassadors in Brussels on Thursday that the second phase of the operation is now ready to start.

A diplomat told Reuters the phase two start “would imply the commitment of new vessels, military personnel, and financial resources.”

The third phase will see the EU operation destroy boats “preferably before use” and to apprehend traffickers and smugglers.

The phase twe expansion follows a recent increase in people drowning off the coast of Libya in their attempt to seek refuge on the EU mainland.

At least 30 died on Thursday when a boat sank carrying 200. Another 53 met the same fate on Wednesday on three overcrowded migrant boats, also off the Libyan coast.

The late Libyan dictator Muammar Gaddafi had made deals with the Italian government to stop embarcations.

But smugglers now operate with impunity in Libya, which is divided into at least four parts and with the government in Tripoli, which controls most of the embarcation points, left out of EU planning because the EU recognizes only a rival government, based in Tobruk.

The EU mission needs Benghazi’s permission to enter Libyan territorial waters or a green light from the United Nations. It has received neither.

The Tobruk authorities told the AFP news agency in May they wouldn’t accept any violation of Libyan sovereignty.

“Any vessel found in Libyan waters without previous co-operation or permission will be targeted by the air force”.

For his part, Italy’s chief of defence from 2008 to 2011, General Vincenzo Camporini, told this website over the summer the naval operation would end up helping the smugglers.

“In essence, it’s helping the smuggling operation because it provides people with more means to reach their desired objective, which is to land in Europe”, he said.

He praised the EUnavfor chief, Credendino, who used to serve under him.

But he said boat and fuel depot-destruction on Libyan coasts risks casualties because smugglers are likely to use migrating people as human shields and because armed groups, not least Islamic State cells, are likely to attack EU forces.

A French security source with experience in Libya, who asked not to be named, also questioned the logic of the EU mission.

“Do you have any idea of the cost of a sea/land missile, compared to the cost of a Libyan fisherman’s ship?”, he told EUobserver.

“All the real specialists in Europe – military, navy, professional security firms – are laughing about this”.