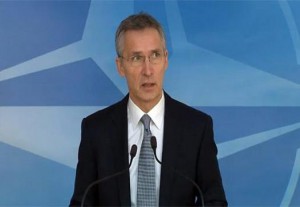 The North Atlantic Treaty Organization (NATO) member states on Friday reiterated commitments to continue its support from the Afghan government and provide financial assistance to its security forces until the end of 2020.

NATO Secretary General Jens Stoltenberg said this to reporters after the end of the military organization’s defence ministers meeting in Brussels, the capital of Belgium.

Afghanistan, however, was not the main point of discussion, but the NATO chief said that member states had exchanged their views about situation in Afghanistan during the meeting.

Afghan security forces required amount $4 billion annually for its expenditures which the NATO had pledged to provide it in their earlier conferences held in Chicago in 2012.

According to Stoltenberg they evaluated the performance of Afghan security forces and supported the NATO Resolute Support (RS) mission in Afghanistan.

“The NATO member states had agreed to continue helping Afghan security forces in three areas of training, advising and equipments because these three elements were important for the stability of Afghanistan,” he said.

The top NATO official said that they would continue looking at the situations in Afghanistan and would work closely with Afghan security forces until the country got stabilised.

“Afghan security forces have enhanced their abilities as they were in charge of the entire country’s security affairs. They have made positive development and proved that they were fully capable of responding to the Taliban and other insurgents’ attacks, adding the there were still problems in some areas which need to be improved,” said Stoltenberg.