You are here: Home / Europe / NATO: No attack on ISIS in Libya despite threat to Italy, but alliance charter could be invoked if security worsens 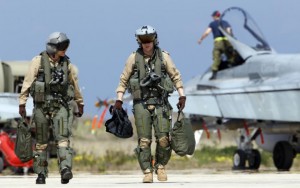 The Western alliance has no current plans to attack ISIS targets in Libya despite the urging of Italian Foreign Minister Paolo Gentiloni and the recent drowning of as many as 850 refugees fleeing the advance of the jihadist army.

A NATO official who requested anonymity told WND that a military response to the refugee crisis “is not under discussion.”

“Every situation and crisis is unique, and allies will decide on a case-by-case basis whether or not to invoke Article Five,” the NATO official said in an email from the alliance’s Brussels headquarters. “What is clear is that NATO will defend all allies against any threat.”

If ISIS were to attack Italy, a NATO member, it could prompt NATO to counterattack ISIS sites in Libya by invoking Article 5 of the NATO Charter.

Article 5 was used when al-Qaida attacked the United States on Sept. 11, 2001. NATO members attacked Taliban sites in Afghanistan where the al-Qaida leadership resided.

“The difficulty will be in launching air attacks against ISIS forces, especially where there is a high concentration of civilians and growing numbers of migrants who are fleeing the country to seek refuge in Italy,” a former U.S. official told WND.

Gentiloni had proposed “targeted anti-terrorist strikes” in the Libyan coastal area in an effort not only to reduce the massive influx of refugees but prevent ISIS from infiltrating the ranks of the refugees and using Libya as a base from which it promised to launch attacks on Italy itself.”

“We don’t have months and months to sort this out,” Gentiloni said. “The double risk of the advance of the Islamic State group in Libya and the waves of migrants means we are in a race against the clock.”

Sources agree there would be little appeal in Europe or the U.S. for full military intervention in Libya because of the political unrest that occurred after NATO attacked Libya in 2011 to oust Libyan leader Moammar Gadhafi.

The NATO official pointed to the changing security environment in Europe and said NATO is taking steps to adapt to it.

“We are doubling the size of NATO Response Force from 13,000 to 30,000,” he said. “And we are standing up a new 5,000-strong, quick-reaction force. This is in response to the challenges we face on our eastern and on our southern borders.”

He said NATO also is watching closely the Middle East to be prepared should the security environment require it.

In addition to the ongoing conflict in Iraq with ISIS, which has carved out a portion of the Sunni-dominated part of the country to create its caliphate along with a portion of Syria, the Sunni jihadists are threatening Jordan.

Members of NATO already are bombing in Iraq as part of a U.S.-led anti-ISIS coalition.

“We are stepping up our support for Jordan, and we are ready to help Iraq improve its defenses,” the NATO official said. “The alliance also stands ready to support Libya with advice on defense and security institution building, once the security conditions allow.”

The ISIS takeover of portions of northern Libya has forced refugees to escape, primarily to Italy across the Mediterranean Sea. The U.N. estimated as many as 850 migrants died April 19 when a crowded ship of migrants capsized and sank off the coast of Libya on its way to Italy, drawing international attention to the crisis.

European concern about ISIS elevated when the jihadist group declared its fighters were “at the south of Rome.”

“ISIS is a threat that cannot be overlooked nor underestimated,” Sebastiano Sali of the Department of War Studies at King’s College in London told The Local.

As a consequence, Libya has become a breeding ground for jihadist groups, such as ISIS, which now sees it as a base from which to launch attacks on the African continent and southern Europe.

Paolo Palumbo, an Italian military historian, recently wrote in the military news website Sofrep that Italy could be the next to be attacked by al-Qaida or ISIS.

Rome and the Vatican were named as targets by ISIS leader Abu Bakr al-Baghdadi, Palumbo noted.

“The action the Italian government has taken in the fight against terrorism is not enough,” he said. “This is very dangerous.”

“We must be careful,” he added. “There are many people, even Italians, who fight for al-Baghdadi and would love nothing more than to raise the black flag of ISIS over Vatican City.”