You are here: Home / West Asia / Nato nations to keep presence in Afghanistan 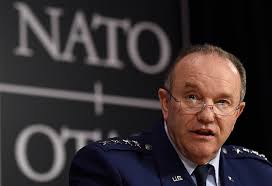 Italy, Germany and Turkey are set to keep their deployments in Afghanistan at current levels, senior Nao officials said on Monday after the US government decided to prolong its 14-year-old military presence there.

The Taliban’s brief takeover of a provincial capital has raised concern about the strength of Afghan state forces and both the United States and its Nato allies now say events, rather than timetables, must dictate gradual troop reductions.Gen. Philip Breedlove, Nato’s top commander in Europe, said he had assurances that Nato countries will continue alongside the nearly 10,000 US troops in Afghanistan.

While discussions of exact numbers are still continuing, the biggest national deployments are not in doubt, he said. “Several of our largest contributors have already communicated with us that they will remain in their current posture,” Breedlove told Reuters.

He declined to give details. But a second senior Nato official said Germany, Turkey and Italy were willing to remain in Afghanistan at their current levels. Italian Prime Minister Matteo Renzi said last week that Italy is considering keeping its soldiers in Afghanistan for another year.

The official said that “our understanding is that is going to happen.”Germany, as the top Nato-country contributor, has around 850 troops in Afghanistan, followed by Italy with 760 and about 500 for Turkey, according to the latest Nato data. “We should make any changes on our troop structure based on conditions on the ground, not on schedules,” Breedlove said.

“Other nations are already ringing in that they are committed.”Unlike the United States, Nato has never set an end date to its “Resolute Support” training mission in Afghanistan, currently a 6,000-strong force that also includes troops from some 40 countries, including Nato members, the US and their allies.

A formal decision is expected to come at Nato’s next meeting of its foreign ministers in Brussels in early December, a third official said. Although Afghan forces have recaptured the strategic northern city of Kunduz, its brief fall to the Taliban last month underscored concerns about the capabilities of Afghanistan’s security forces.

A US military strike in Kunduz that hit an Afghan hospital run by Doctors Without Borders, or Medecins Sans Frontieres (MSF), also generated international outcry and underscored the perils of leaving a fragile country too quickly. US President Barack Obama had aimed to withdraw all but a small US force before leaving office, pinning his hopes on training and equipping local forces to contain Taliban militants fighting to return to power. But now he will slow plans to draw down US troops from Afghanistan and instead keep the current force of 9,800 through most of 2016 before beginning to trim levels from 2017.