You are here: Home / West Asia / NATO looking at funding Afghan forces until 2020 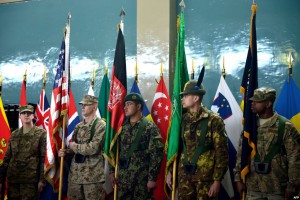 Launching his annual report for 2015 in Brussels, the NATO chief said they would continue to train, advise and assist the Afghan army and police.

He said the Afghan forces faced significant challenges, but they were holding their ground.  “We decided, in 2015, to maintain our current level of troops this year and we are looking at how we can contribute to the funding of the Afghan security forces until 2020.”

He said every NATO ally was part of the global coalition to counter Daesh or Islamic State and the coalition’s high degree of interoperability was a key asset.

To address the root causes of instability, he said, NATO was working even closer with partners in the region.  “We are building the defence capacity of Jordan.  We will soon start training Iraqi officers and we are working with Tunisia on special operations forces and intelligence to help them be stronger in defending themselves.”

Stoltenberg said in the year 2015, they saw brutal terrorist attacks in their cities and the biggest refugee crisis in Europe since World War Two.

“We also saw it in Russia’s continued actions in Ukraine and its recent military build-up in Syria and the Eastern Mediterranean.  But last year also showed how NATO is responding.”

He said they implemented the greatest strengthening of their collective defence since the end of the Cold War and cuts in defence spending among European Allies had now practically stopped.

The alliance chief said they  had visibly increased NATO’s presence in the eastern part of the alliance and to the south, they had agreed to increase the presence of AWACS early warning aircraft over Turkey, as they continued to augment Turkey’s air defences.

“We have tripled the size of the NATO Response Force to more than 40,000 troops, and at its core is our new, very high readiness ‘Spearhead Force’ that is now operational,  ready within days to deploy to wherever it is needed.  I was really impressed when I saw it in action at its first deployment exercise in Poland.”

He said the alliance was improving its intelligence and early warning systems to combat hybrid warfare, speeding up decision-making and enhancing cyber defences. “Last year, we conducted around 300 allied exercises, including the largest and most complex one in over a decade.”

The NATO chief said they would continue to step up exercises this year and would remain transparent in what they do.

He said over the last two years, Russian air activity close to NATO’s European airspace had increased by around 70 percent.  In response, he said, allied aircraft scrambled over 400 times to intercept Russian aircraft. “We have made substantial progress with our new Alliance Ground Surveillance system.”