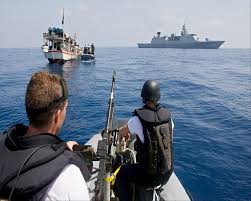 NATO has ended Operation Ocean Shield after a sharp drop-off in attacks by Somali pirates.

The NATO operation had been one part of a highly successful coordinated international response to the threat of piracy that also included the European Union, the United States and other independent nations.

During its peak, piracy off the Horn of Africa had an economic impact of $7 billion, with more than 1,000 hostages taken. There hasn’t been a successful piracy attack since 2012, down from more than 30 ships at the peak in 2010-11. The NATO planes flew from the Seychelles.

The commander of the Danish air force detachment that carried out the last mission emphasized that NATO can resume its anti-piracy efforts at any time – whether in the Somali basin or the Atlantic Ocean.

NATO is now shifting resources to deterring Russia in the Black Sea and people smugglers in the Mediterranean.

NATO’s spokesman Dylan White said in a statement that the global security environment had changed dramatically in the last few years and that NATO navies had adapted with it.

After more than a decade of NATO-led operations far beyond its borders, the military alliance is shifting its focus to deter Russia in the east, following Moscow’s 2014 annexation of Ukraine’s Crimea peninsula.

Earlier this month, NATO broadened its operations in the Mediterranean to help the European Union stop criminals trafficking refugees from North Africa.