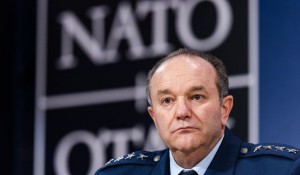 The Russian Foreign Ministry has repeatedly claimed the reason for Moscow’s military buildup in Syria has been to fight the Islamic State, but NATO’s top commander said Monday he believes the presence of Russian anti-aircraft systems in the country points to ulterior motives to hinder U.S. and allied operations in the region.

“As we see the very capable air defense [systems] beginning to show up in Syria, we’re a little worried about another A2/AD bubble being created in the eastern Mediterranean,” Gen. Philip M. Breedlove, NATO Allied Command Operations in Europe Supreme Allied Commander, told an audience at the German Marshall Fund.

A2/AD stands for anti-access/area denial, and refers to the means used to prevent the enemy from infiltrating certain territory.

“During the early stages of warfare, A2/AD could have been a moat around a castle, or spikes dug into the ground—anything to keep the enemy off a certain swathe of territory,” The Washington Post’s Thomas Gibbons-Neff explains. “In the 21st century, however, A2/AD is a combination of systems such as surface-to-air missile batteries and anti-ship missiles deployed to prevent forces from entering or traversing a certain area—from land, air or sea.”

Now Russia has set up an A2/AD bubble in Syria, its third denial zone around Europe, Gen. Breedlove. The first is located at Russia’s naval base in Kaliningrad in the Baltics and the second zone in Russian-occupied Crimea coves the Black Sea.

The newest A2/AD bubble in Syria suggests that Russia’s involvement in the region has little to do with fighting Islamic State terrorists and a lot more to do with aiding embattled Syrian President Bashar al-Assad, Gen. Breedlove said.

In recent weeks Russia has moved more than two dozen aircraft, at least 500 troops, tanks and other armored personnel carriers to an airfield in Latakia province in Syria according to multiple news reports.

President Obama and Russia President Valdimir Putin held a 90-minute private meeting Monday at the U.N. General Assembly in New York. The two also made separate speeches to the assembly, with Mr. Obama raising concerns over Mr. Putin’s actions in Ukraine while Mr. Putin blamed the U.S. and its failure to cooperate with Mr. Assad for causing chaos in Syria.