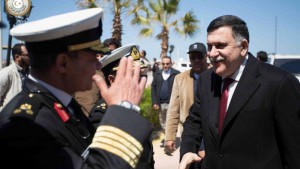 The Secretary General of NATO said Thursday the alliance is “ready to help” fight militants in Libya if it wants military assistance.

“It is a very difficult and dangerous situation in Libya,” Jens Stoltenberg told Sky News. “We see fighting, we see turmoil. We see increased presence of (ISIS).”

Stoltenberg told Sky News that NATO isn’t planning a combat mission in Libya. He said the alliance has been in touch with the Libyan government and is ready to disarm militia groups and possibly provide military training in the future.

“We are ready to help,” Stoltenberg said. “But they have to request it – so we will not send in troops and we will not do any activities in Libya at all without a request from the Libyan government.

Britain has provisionally offered to contribute 1,000 troops to an Italian-led training mission.

Stoltenberg also condemned flyby of Russian warplanes in the Baltic Sea over a US Navy destroyer that took place Monday. He called Russia’s behavior “unsafe and unprofessional.”

“We’ve seen several examples of this kind of behavior and it just underlines the importance of transparency of risk reduction,” he said. “We’re going to have a meeting in the NATO Russia commission next week and one of the issues we’re going to address there is exactly military activity and the need for risk reduction transparency.”

Stoltenberg said that both NATO and Russia have to avoid hostile incidents like the incident in the Baltic Sea and the Turkish shoot down of a Russian plane.

“If they do happen they don’t spiral out of control and create really dangerous situations.”