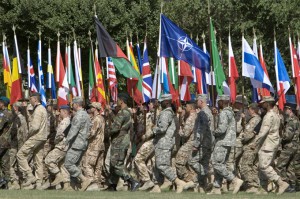 NATO and Afghan leaders on Wednesday agreed on a framework for a future joint military-civilian presence in Afghanistan when the alliance’s current mission ends, NATO’s Secretary General Jens Stoltenberg said.

While the new mission would have a military component it would notably be led by a civilian, Stoltenberg said after a session of the NATO foreign ministers meeting in the Turkish city of Antalya attended by Afghan Foreign Minister Salahuddin Rabbani and NATO’s top general in Afghanistan, John Campbell.

“We took a major decision,” Stoltenberg told reporters. “We will maintain our presence in Afghanistan even after the end of our current mission.

“Unlike our present mission, our future presence will be led by civilians.”

He said the future mission “will have a light footprint but will have a military component.”

Stoltenberg said NATO offices had been tasked with working out a plan of the new mission by the autumn. It is not yet immediately clear when the Resolute Support mission will end and the new mission could start.

“The aim will be to advise Afghan institutions to help them become self-sufficient and help them build on what they have done so far,” he said.

He said NATO and the Afghan government had succeeded Wednesday in agreeing on the “guidelines” of the new mission.

Without giving precise figures, Stoltenberg said the numbers would be smaller than the present number of personnel, which comprises around 12,500 troops.

With deadly Taliban attacks against the security forces a regular occurrence, Stoltenberg acknowledged that Afghanistan remained a “dangerous place”.

He said the Afghan security forces had made “enormous sacrifices” and NATO allies and partners “will stay the course.”

Belgian Foreign Minister Didier Reynders said on the sidelines of the meeting that the violence in Afghanistan remained significant at the start of 2015, “more than we expected”.

“This means that the conflict with the Taliban remains very much open.”

Speaking separately after the talks, Rabbani hailed the “commitment” shown by the alliance towards Afghanistan.

“We received assurances from all the NATO members that their support will continue to enhance the capability of the Afghan national security forces,” he said.

“In the coming years, they will be standing by the Afghan people.”

ISAF was established by UN Security Council resolution in 2001 in the wake of the US invasion of the country to provide security and fight the Taliban after their overthrow by American forces.

The ISAF concluded operations in December 2014, making the transition to the Resolute Support mission.