You are here: Home / MidEastGulf / Nasrallah: we will win against Islamic State 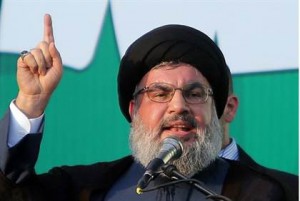 Hezbollah leader Hassan Nasrallah vowed on Wednesday to beat back the Islamic State troops clashing with his forces on the Lebanon-Syria border, after the two terror organizations fought a fierce battle in the Qalamoun region.

“ISIS started the battle,” the Lebanese arch-terrorist stressed. “But we will continue this battle to the end. We are determined to bring an end to this heretical and terroristic group on our border no matter how much we have to sacrifice.”

“Our will is firm and strong. We will no longer allow such terrorists to remain near our villages,” Nasrallah added.

ISIS attacked several Hezbollah positions in northeast Lebanon on Tuesday, battling for two hills but failing to capture them. At least 14 ISIS fighters and 8 Hezbollah terrorists were killed in the battles, local sources said.

Hezbollah later attacked a group of ISIS leaders in the area of Arsal, near the fighting, killing a top local leader, the group said.

Meanwhile, ISIS has blown up a pipeline feeding natural gas from eastern Syria to the suburbs of the capital Damascus.

According to the Syrian Observatory for Human Rights said ISIS blew up the pipeline near the T-4 military airport in the east of central Homs province shortly after midnight Wednesday.

ISIS has seized a number of oil and gas fields in Homs province, most recently during its offensive on the ancient city of Palmyra. These fields were key to Syria’s embattled regime, which relied on them for power generation in its dwindling areas of control.

While rumors have been rife that Iran was planning to send troops to Syria to assist Bashar al-Assad to fight both ISIS and Al-Qaeda affiliated rebel groups, Iran said Wednesday that it had not sent any troops to Syria, and had no plans to do so.

“The Syrian government and people have the capacity to resist and will continue to do so,” said Afkham, whose country provides Damascus with political and financial support as well as military “advisers” for the armed forces.

Despite the denials, much evidence has surfaced over the years of Iranian Revolutionary Guard troops commanding and even fighting alongside pro-regime forces against Sunni rebels.