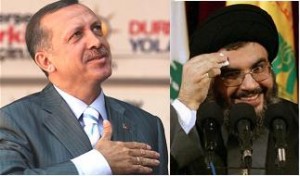 Hezbollah Secretary General His Eminence Sayyed Hassan Nasrallah delivered a speech in which he tackled various regional and internal titles, like reported by abna24.com .

Addressing thousands of Hezbollah university students, Sayyed Nasrallah congratulated the Muslims, Christians and all Lebanese over the blessed birth of the Noble Prophet and his grandson Imam Sadiq [PBUH] and the birth of Jesus the Christ.

In parallel, His Eminence extended gratitude to the Resistance fighters at the front-lines in Syria, Yemen, Iraq, Gaza and other areas south of the Bekaa.

On another level, he viewed that “Islam had not been subjected to media distortion as has happened in the past few years because of the abuses that are broadcasted to every house within minutes.”

“No distortion has happened over the decades as what had happened by the armed groups, especially ‘Daesh’ [the Arabic Acronym for the terrorist “ISIS”/ “ISIL” group] that raises flags that are sealed with so-called the Messenger of Allah,” Sayyed Nasrallah added.

He also mentioned that the terrorist groups, mainly Daesh, have committed massacres at different levels displaying hideous means to carry out their crimes. “He who is silent over this abuse is a partner in the distortion of Allah’s religion and His Messenger.”

“Wahhabism does not recognize the birth of Prophet Mohammad. Their scholars went to the extent that they reject and consider all those who celebrate it as atheists,” he said, noting that “this holiday is known for all Muslims Sunnis and Shiites.”

The Resistance leader also recalled how the Wahhabis bombed celebrations of Prophet Mohammad’s and sought to impose their ideology by force of arms. “Those who reject the celebrations of the Holy Prophet will definitely the Christmas celebrations.”

As His Eminence urged all sides to condemn such acts, he emphasized that denouncing these acts should be a daily responsibility for us and we must raise our voices.

“Their crimes, killings, slaughtering, burning in cages … and destruction of Islamic, Christian and other religious sites and everything linked to history. It’s a comprehensive massacre,” he cautioned.

In response, Sayyed Nasrallah confirmed that we have a moral, religious and historic responsibility to say a word, write a sentence, express opinions that reject and condemn such crimes. “Those who remain mum are partners in the crimes against this religion [Islam],” he added.”

In a similar context, Sayyed Nasrallah stated that there is a terminology that is much spread in the Western and Arab media i.e. the talk of “Islamic” terrorism, “radical” Islam and “Islamic” terrorist groups. This comes as the media insists on using the “Islamic state” and not Daesh. This has an impact on media and psychological warfare.”

Meanwhile, His Eminence firmly denounced the heinous act of suiciding a child girl in Syria.

“It is unacceptable to take advantage of little children in suicidal attacks or to carry out killings similar to the burning of the two Turkish soldiers today. The criminals are harming the image of Islam,” he said.

In addition, Sayyed Nasrallah underscored that “that monster appeared after that to say that he had sent his afraid little child it to God.”

“Everyone and evey Muslim in the world should condemn the criminal and barbaric monster who sent a child to carry out a suicide bombing at a police station in Damascus.”

Commenting on Daesh’s attack against the Jordanian police in al-Kark, he wondered if the latest incident doesn’t urge the Jordanian government to be warned and take a firm position in stopping to support terrorists and armed groups who carry the same ideology.

His Eminence also denounced the heinous crime that Daesh recently committed through burning two Turkish soldiers alive. He recalled that the whole wide world knows that Turkey has provided support for Daesh more than any other country in the world.

“Turkish people are invited to take a decisive position as for Daesh,” he highlighted, pointing out that “the Turkish government does not want its people to acknowledge how it supported Daesh through oil, arms and money and what all Erdogan has offered for terrorists.”

Sayyed Nasrallah went on to say: “Islam doesn’t direct us to do such acts. We should raise [our] voices [against these acts], whether those harmed are our allies or not.”

Regarding the recent victory sored by the Syrian army and its allies in Aleppo, His Eminence highlighted that “what happened in Aleppo in the last months is one of the most brutal battles in Syria for years. The battles in west of Aleppo included tens of thousands of militants from different parts of the world. It was a daily continuous battle with the aim of overthrowing Aleppo.”

He also described the battles in Syria’s second city as one of the harshest combats the region has seen in years.

“Aleppo’s battle is one of the major defeats of the other camp and it is a victory for the anti-terrorism front and an important military development for our camp. But this does not mean the end of the conflict but rather that the scheme that was seeking to oust the regime has ended,” Sayyed Nasrallah added.

As he unveiled that the support and mobilization provided for the battles in Aleppo cost billions of dollars at the financial and logistical levels, Sayyed Nasrallah this astonishing, facilities and capabilities support has surpassed the amounts provided by the whole Arab world for the Palestinian people over a period of 60 years.

Meanwhile, His Eminence assured that the Syrian government’s victory in Aleppo could pave way for a political settlement to the conflict, describing

“We should fortify our success in the field and politically,” he emphasized, adding that he
believed this could lead to the end of the conflict in Syria through political means.

He also lashed out at deceptive media reports that he said launched false campaigns about the battle in Aleppo. “Pictures of children and devastation from the July war in Lebanon and “Israeli” aggression against Gaza were claimed to be of children of Aleppo. They further brought pictures from starving children in Yemen claiming that they are in Aleppo.”

He continued, “all over the last week, civilians went out of the east of Aleppo, as militants fled the city.”

He asked, “Is there a city that either Daesh or al-Nusra Front had entered and emerged victorious in its battle in which they have allowed the civilians or fighters to get out or flee?”

Refuting all claims that the Syrian army or its allies seek to establish demographic changes, His Eminence elaborated that armed groups were behind the demographic changes that happened. “There are no people of other faiths or other political affiliations in the areas that they control.”

He also assured that residents of Aleppo will return as those of Daraya.

He also reminded that both Saudi Arabia and the US sought to block any political solution. Thus, according to His Eminence, what had been scored in Aleppo is a major achievement for the Syrian army and its allies.

“The credit goes to the Syrian leadership, army and people, who took the decision to fight. Syria’s allies offered help but the Syrians are the ones who are creating the future of their country and the entire region,” the Resistance Leader underscored.

Hailing the fact that some countries have become realistic in dealing with the Syrian file, Sayyed Nasrallah stressed that the next stage will be focused on consolidating the victory in the city of Aleppo and its suburbs because the armed groups will seek to target the city and its suburbs.

Moving to the Lebanese internal political front, Hezbollah Secretary General assured that there exists no hurdles in the way of the Lebanese cabinet’s policy statement.
However, he urged the government not to consider itself as a merely elections government. “The government must shoulder its full responsibilities towards the people at all level, he said, noting that “it must not use the excuse of being an elections government to justify any impotence or negligence.”

Sayyed Nasrallah also refused allegations that this government is controlled by Hizbullah. The Resistance movement only wants to ensure that the new Lebanese government represents people from all walks of life.”

“Some like to claim that this is “Hizbullah’s government” and that Hizbullah wants to seize control of the country and the institutions. These are false claims that some impotent and weak parties hide behind. We do not want to seize control of the country even if all political forces and parties ask us to do so… No one can accept to shoulder the responsibility of a country facing this amount of difficulties,” he said.

Regarding the electoral law, Sayyed Nasrallah reiterated that Hezbollah supports an electoral law based on proportionality.

However, he said that his party is open to dialogue as it understands the concerns of some parties which must be taken into consideration. “We do not back a return to the 1960 electoral law.”

“Our country is entering a state of political and security stability. We’re awaiting the next parliamentary elections and we must remain alert at the security and political level because the terrorist groups are angry over their defeat. The country’s future hinges on everyone’s cooperation and understanding.”

Sayyed Nasrallah also denounced the stupid and dangerous attempt of the Bahraini regime and its supporters to storm the house of Ayatollah Sheikh Isa Qassem with what it carries from devastating repercussions.