You are here: Home / MidEastGulf / Nasrallah: the US can’t protect anyone in Syria, Iraq or Lebanon from Islamic State 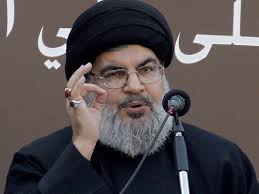 Hezbollah leader Hassan Nasrallah warned Sunday that the United State can not protect anyone in Syria, Iraq or Lebanon from the radical Islamic State group.

Beirut-based newspaper The Daily Star cited the leader of the Shi’ite Lebanese organization as calling on his country’s population and that of the region to confront the threat posed by group formerly know as ISIS that seeks to reestablish a medieval caliphate in the Middle East.

Nasrallah – a staunch opponent of Islamic State – expressed his strident warning against the group that has taken control of swaths of land in Lebanon’s neighboring Syria and Iraq, saying silence over the threat would not ensure safety.