You are here: Home / MidEastGulf / Nasrallah: psychological war seeks to affect determination and struggle of Syrians 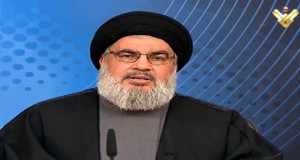 Hezbollah Secretary General Hassan Nasrallah said the war today is not only the war of the Syrians, but it is a defense for Lebanon, Palestine and the whole region as “we will remain assuming our responsibility in Syria.”

“We are in front of a psychological war which seeks to affect the determination and struggle of Syrians and to achieve, through rumors, what it has failed to gain during the 4-years universal war on Syria,” Nasrallah said in a TV speech broadcast on Tuesday.

He called on Arab and Islamic states to work for lifting the blockade imposed on the Yemeni people and delivering humanitarian aid to them.

“We are witnessing a big deception process by Saudi Arabia concerning Yemen and there is a clear Saudi failure due to the unity of the Yemeni people,” Nasarallah added.

Nasrallah said the threat of the terrorist groups in al-Qalamoun was not presupposed, rather it was real and imminent.